I don't know much about what it is like to be a black woman in eurocentric societies. I know things that I have heard from authoritative sources - that one experiences daily microaggressions or worse, that one's voice is rarely heard politically, that one is restricted to certain forms of visibility (eroticised, rendered primitive, feared), and that if one moves outside of these restraints, there are harsh disciplinary measures waiting. Then there are the first person accounts of racism, for example in the field of journalism, which if you listen to them, oscillate between horrifying and a kind of WTF? WHY??

I've heard these things, and have also actively researched them. And yet I feel I still know, and will only ever know, an extremely small part of what this life is like. That's not to be defeatist, just to say that this is fundamentally not any reality I could possibly inhabit, and so attempts to empathise based on my own experience or knowledge will always fall short.

Nevertheless, attempts are regularly - and not without bravery born of necessity - made to communicate this experience across various subjectivities that comprise a given audience. Soul Sisters' Mirror, Mirror, a work first developed in 2017 and undertaking its second rendition at Ballhaus Naunystraße, attempts to do just this. It's beauty is in its simplicity - 5 black women tell their stories to an audience, with some slight variation and mixing of formats. Stemming from initial writing from Soul Sisters founding member Christine Seraphin, the collaborators have crafted a warm invitation to an audience to empathise, relate, and possible to cross the divisions that a difference in experience brings. 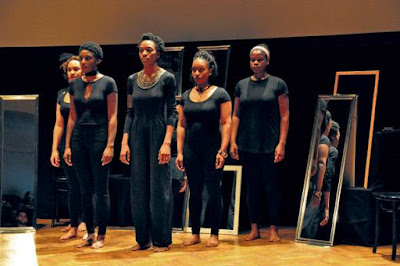