‘The Collective’ are four actors well known to Melbourne’s theatre scene. Eloise Mignon is part of a lineage of experimental theatre, Gareth Davies and Thomas Henning are of anti-theatre Black Lung fame, whilst Eryn Jean Norvill has featured as, in her words “the tragic heroine” in various productions across Australia. I think there is also TV and film involved, but it’s in the former capacity that your correspondent recognizes them, today writing from a hiding place within a Hegel and Lacan performance conference Repetitions in Ljubljana, Slovenia.

To my knowledge, as suggested by the rather banal label for the group (evoking the worst of Soviet-era bureaucracy), they’ve never been on stage before together as a group. So I was looking forward to seeing what happened during Remake, the result of a few weeks development in Budapest.

The terrorizing elements of Henning and Davies’ Black Lung days are present from the beginning, with a hoax about a technical failure and sideswipes at the previous group's poorly executed bump-out, skillfully played to the back row of roaring Aussies by Davies. The actor claims that although he is sensitive to the fact that we are, no doubt, exhausted from sitting through 3 days of lectures about Hegel and Lacan - nevertheless he’s ‘proud to be the final lecture of the conference’ and appreciates our attention for ‘the next two or three hours’. Thankfully, Mignon pokes her head out the back and calls him like a dog - “here boy” - which he eventually responds to, ending the scene.
Read more »
Posted by Richard Pettifer at 10:15 AM No comments:

My time at the Repetition/s conference in Ljubljana was defined by frustration. I strive to be the first to admit I am an idiot - not only unqualified for academia, but barely qualified for contemporary life. Not only do I know that I know the Socretian nothing, but I also understand, with a growing sense of desperation, the consequences of that lack. I am occupied in a practice of attempting to concretely formulate our contemporary situation - but the building of this position is in many ways without firm ontological foundation, rendered flimsy by the sheer speed and elusiveness of life today - theory included. Metaphysical objects shift from feverish clarity to total uncertainty before I can grasp them - concrete will set, only to turn to straw, preceding the collapse of the entire house: the ignorance of the event just past colliding spectacularly with the impending disaster of the future.

So attending a conference on Performance Philosophy is in many ways my natural state of confusion. The combination of lecture, performance, and lecture-performance across the various locations of Ljubljana, the City Museum, the Filozofska Fakulteta and the Dance Theatre, provides a more than adequate complex layering of realities to complicate my subjective experience to the point of posthumanist nausea. There is something nicely comforting, in a violent way, about the over-saturation of information present at such an event, as well as the total ontological despair - as one academic expressed to me, 20 minutes is simply not enough time to formulate any concrete position in presenting a paper, a crisis which repeats itself through various arguments - each of them experiencing a kind of Freudian castration just at the crucial moment where they might actually say something. 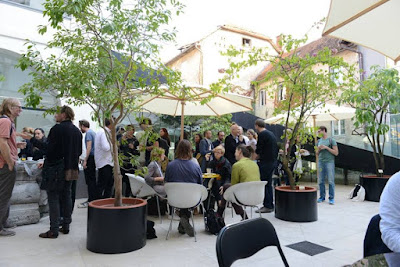 But there are some points which, despite the slipperiness of my positions, acknowledged doubts and even self-branded idiocy, I will nevertheless claim. The whiteness and euro-centrism of the Repetition/s conference are two symptoms of, and causes of, the ongoing crisis of academia and public accountability. This should be protested against, I claim, as a means of taking responsibility through its concrete formulation and being rendered visible. The ripples heading through academia are particularly disturbing in our current context. Mingling among the safe, white intellectual community of Ljubljana, supported theoretically by its euro-centric psychoanalytic foundation, you would hardly think there was a mobility crisis occurring in Europe. You could forget, in the fantasy of specific details of Lacan and Hegel, that proto-fascist, and openly fascist groups are on the rise in Europe, the United States, the UK and Australia - that Austria may yet elect a president whose party was founded by the former Nazi Agriculture Minister. In the midst of just one paper engaging in post-colonial discourse, an absence of black perspectives, and an unwillingness to expose one's own positions to any counter-discourse, it is easy to see the failure of academia today, and its problems in public communication. The absence of encounter between ideas and people within the community bodes poorly for its ability to relate outside its sphere.

Read more »
Posted by Richard Pettifer at 8:49 AM No comments: