For the Disconnected Child

If you go to the theatre regularly, you might be forgiven for asking - the cornucopia of formal play now renders the idea itself almost defunct. Audiences expect it now, and, if you ask them, are often pleasantly surprised when it doesn't happen. (The argument here being: when offered something which sits within comfortable parameters, it's possible to stop thinking about 'how' it's said, and start thinking about the 'what').

At its best, destabilising form can resist information's enslavement at the hands of expectation. This goes directly to the ontological centre of the question: 'how is meaning communicated?'. Art has long thrived on the gap between on one hand, 'form' as part of an artistic toolkit, and on the other, its relentless deployment in structuring the information which supply the media with a stream of repetitive narratives, governments with means of border definition, and society with codes of etiquette in which it should behave. The word 'form' in an ontological sense, is the shape meaning takes. Its destabilisation can also be an exposure of, and resistence to, the ideology that form transports. The greatest formal experimenters, Godard, Meyerhold, or John Cage for example, use formal play as a weapon brandished against those who would contain meaning, and therefore reality, within the confines of the already understood norms or codes.

Breaking out of these structures is one possible means by which theatre can be a place for resistance. Arguably it breaks through to the fundamental objective of art itself.

Such attacks date quickly - especially now, as forms are fluid and constantly changing. One year your experiences are coming via your X-box, the next via your Blogroll, the next your Twitter feed, you might travel and people travel to you and bring their customs, habits, and etiquettes, and governments slide borders and policies with the prevailing winds. Any serious attempt to tackle the structures of meaning through form must now address the fact that human experience is already in a shape-shifting flux.

For the Disconnected Child, a collaborative project headed by Schaubuehne wunderkind Falk Richter, seems therefore rather, well, disconnected. This is hybrid theatre - centre stage is the interplay of drama, music and contemporary dance, whilst an omnipresent central concept hangs over all of it, never directly stated but continuously hinted at. 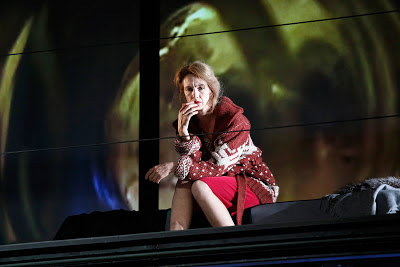 Read more »
Posted by Richard Pettifer at 5:13 PM No comments:

"Due to its failure of being defined, slotted, circled in, challenges the mainstream status quo" - Border Songs Festival, India

In January to May of this year, I traveled from Australia to Germany overland, making performances and residencies in some places (theatre4every1.blogspot.com). I was looking for inspired theatre. This is a very hard to find when you're traveling. Maybe it's because when you are in a country and you don't know the language, everything is theatre. You are constantly mesmerised and confounded by new thoughts and sounds. Small stages pop up everywhere (but many of them, I claim, false).

One of my techniques was to trawl through Couchsurfing for people who had listed 'theatre' in their profiles. This is how I found Arka Mukhopadhyay. Arka wasn't available to host me or my performances in the time I was in Kolkata, but he put me onto some other theatre-makers, the League of Shadows, of Kolkata, who I was subsequently able to collaborate with.

Arka is currently making a project below and would like support. I made the suggestion to share this on my blog, and he agreed. South Asia and South-East Asia is a region that does not often share theatre through festivals or other events. Unlike Europe, where there seems to be an International Theatre Festival every second week, this region has sometimes minimal cultural integration. Independent theatre can fulfill a unique role here. Something like the festival Arka is proposing has the potential to bind people together in a way that trade relationships and official handshakes simply can't.

Arka's text about the 'Border Songs Festival' after the jump:

Read more »
Posted by Richard Pettifer at 12:15 AM No comments: