"AJ: Then do you take the libretto as having a moral?
LIGETI: Absolutely not. It has no moral.
AJ: You enjoy it for what it is.
LIGETI: Exactly."

Penned by György Ligeti in collaboration with Swedish puppeteer Michael Meschke after the 1934 play La balade du grand macabre by Belgian avant-guarde dramatist Michel de Ghelderode, Le Grand Macabre enacts a kind of terrifying post-trauma, displaying violent actions so inhuman that they disturb reality. In short, Le Grand Macabre is a monster. It doesn't show us who we really are so much as who we pray to god we aren't.

The reference point for Ligeti is the post-WW2 moral and ethical crisis and collapse of societal codes. Ligeti, who lost his father and brother to concentration camps and had to be smuggled over the border from Hungary to Austria on a mail train, was a big fan of such work as Fluxus and Samuel Beckett, which existed in the void left by the war's events and the grapple with the problem of art's role within it. 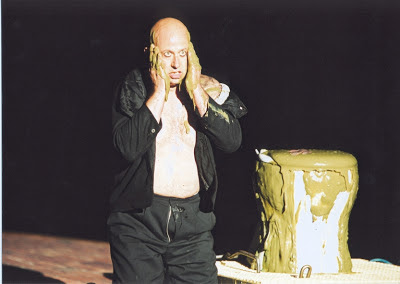 Getting a handle on Ligeti's narrative in Le Grand Macabre certainly isn't easy. Narratives compete for prominence like drowning people pushing on each other to stay above water. Just when you think you have a handle on an authentic ontology - a motif in the music, a character trait, a logical sequence of events - it slips away. Pennies disappear faster than they can drop, making a viewing an extremely destabilising experience. There is a logic here, but it is elusive and intuitive. As Ligeti explains:


"In this plot so many different stories are woven in, therefore the stories become ambiguous. Death is at the same moment a kind of Don Quixote and has his Sancho Panza and his Rosinante. But his Rosinante is not functioning, so he takes his Sancho Panza (it is a drunken Flemish ordinary man—he is the only person that doesn’t believe that he is Death), and this Sancho Panza makes him drunk so that it will turn out that he was Death, but he cannot kill persons. So the supernatural layer of the story is corrupted by Man. When Death is the only person who dies, he is coming from the supernatural level to the normal level. It is a false bottom, because you have the feeling it is tragic, but this is only mask, and under this, if you take this off, it's very comic. But if you take it away further, it's tragic again. "


This rendition, directed by Komische Intendant and Australian shock-jock Barrie Kosky, opens with a cart, a couple of garbage bins and a pile of naked bodies. Two soldiers come out and proceed to adopt sexual positions, stroking each other lovingly and discussing the prospects for them sneaking off to a dark place somewhere to fuck. An oblivious 'Nekrotzar', the personification of Death, soon enters, wondering what's going on, ripping out a man's ribcage and eating it, and predicting the end of the world.

Read more »
Posted by Richard Pettifer at 4:40 AM No comments: