The Importance of Being Earnest

For the second time in 5 years, I find myself back in Australia for family health reasons. For someone who, as a rule, doesn't fly in aircraft, that's a lot of flying. But rules were made to be broken - and as an immigrant, some travel is just unavoidable, as the alternative is comes full-circle towards fascism. As with any strong positions, there should be room for exceptions, which prove the rule. So I'm here until the beginning of April, after which I expect to make my usual long journey through Australia, Indonesia, and Singapore, before finally catching the (almost) unavoidable second flight to Europe.

Being back in Australia is not without its frictions for me, as the country has become decidedly harder-edged (from a pretty high base) even since I left in 2013. But there are joys too - old friends, old places, memories when I was more bored but more financially stable,  and the endless joys of nature (albeit going up in flames, but more on this later).

I will try to write a little while I'm here, but it's a complex time and I wouldn't say I'm in touch with anything that is happening culturally in Melbourne. Still, some opportunities may come up, and it's an interesting challenge for someone used to enjoying to barriers of distance to write in situations that feel uncomfortably close to home. The luxury of foreignness I have as a critic is thoroughly removed, here, to the point where I am dragged kicking and screaming into old paradigms that I don't care about.

But we all have to make our negotiations, don't we?

After the jump, a short analysis of Ridiculusmus' The Importance of Being Earnest, where I was unexpectedly present for the opening at Melbourne's Malthouse Theatre.

The Importance of Being Earnest

Oscar Wilde is nothing if not contrary. A relentless outsider/insider figure, tossing barbs at the aristocratic system while participating in it with over-enthusiasm. Contrary to popular opinion, it seems to me that Wilde’s writing has always contained a feeling of loneliness – as though his domination of the arts through cleverness and wit is only ever over-compensating for a tragic and frightened misfit. Far from a detraction, this observation, coupled with the knowledge that a good portion of the end of his life was spent in jail for the ‘crime’ of “gross indecency” relating to homosexuality,  lends his writing a universal type of sadness, one which reaches over even the blistering bite of his satire. 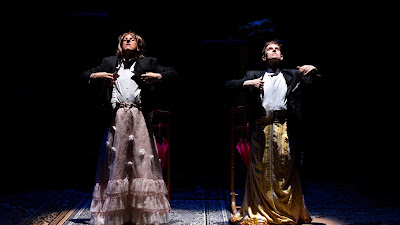 These qualities are particularly hard to spot among the confidence of The Importance of Being Earnest: a Trivial Comedy for Serious People, Wilde’s most famous and over-produced play, known for its symmetrical structures, mirroring and acidic, playful teasing of the English upper-classes. It’s an experiment in contradiction, containing all of Wilde’s brutal critique and enthusiastic participation, presented to the audience on a platter with a smile. The suggestion is, “this is poisonous. But you will enjoy it.”

And enjoy, it audiences commonly do. This version, from UK-Australian duo Ridiculusmus (David Woods and Jon Haynes), is very much a ‘poor theatre’ take on the play, with the two actors playing all of the roles. It’s a conceit that works to highlight Wilde’s incessant doubling throughout the play – the insistence on monogamous match-making substituting for romance, the duality of city/country, the two butlers… the list goes on. The concept of ‘Bunburying’, central to the play’s theme of facades, contains its own duality, as the characters make up second versions of themselves in order to secretly fulfill otherwise unfulfillable desires.
Read more »
Posted by Richard Pettifer at 10:30 PM No comments: