DRAAMA Festival Day 3: Back to where it all began

Day 3 was a heavy day. For one thing, the clouds hang over Tartu as though at any moment they might revolt from their summer codes of conduct and disturb the peace. There's a kind of hesitant energy, as well, with the university semester having begun but not yet in the full swing. Tartu is most famous as a university town - along with Saint Petersburg and Berlin, once forming part of a coalition of highest-quality learning institutions. Today, it's still one of the few in the Baltic universities to offer English-language degrees (no Russian, apparently).

Day 3 saw two heavy shows, the first - The Mistress of the Raven's Stone - is a new play that is so classical it made me think it was written in the 1850s, about events in 1950s Estonia. The second, dealing with the 1960s, is an opera called Estonian History: A Nation born of Shock,  and tells the story of Estonia from its beginnings, apparently with the meteor/meteorite Kaali in about 1500 BC. Both shows are part of the 'Tale of the Century' series, which make up a majority of the English language programming. Apologies to the honest work from the artists behind the late-night Cabaret Siberia - a dark cabaret that stylistically throws back to the traditions of the form. My Estonian language is just not good enough yet.

The Mistress of the Raven's Stone

'If it ain't broke, don't fix it' is an idiom that applies in certain, mainly conservative theatre contexts. Why stray far from the dependable structures of Ibsen and Chekhov? They were the masters of the craft, the unassailable geniuses - right? We should just be making theatre that works, for god's sake, not all of this experimentation!

Not only is such a sentiment totally against the ethos of this writing platform, including the principles for theatre art as an entire practice, and the entire reason for making theatre in the first place - it's also bound to kill the art form itself, which is hindered, and not helped, by lack of experimentation. Thereby, as a general rule, I am unlikely to support something which engages in only storytelling, and makes no attempt to advance the craft.

Still, I can appreciate when something is 'good', in the way that I don't like - I don't like, let's say diamonds, but I am totally willing to put principle aside for a moment, and admire a well-constructed one. And The Mistress of the Raven's Stone is a good play. Everything in it works - from the drawing room set, to the typecasting, to the moments of phantasm. The plot, centred around 1950s Estonia and the testing occupation of the Soviet Union, functions perfectly, characters coming in to advance the plot, making sudden revelations that totally change the previous assumptions, burying historical detail and nostalgia flawlessly inside speech. There are turning points in the appropriate places, a cliffhanger introduction of a new character at the end of the fist act (no less than a Bogeyman!) and a quasi-political discussion about social obligations under an oppressive regime. All the ingredients are there, tastefully arranged. 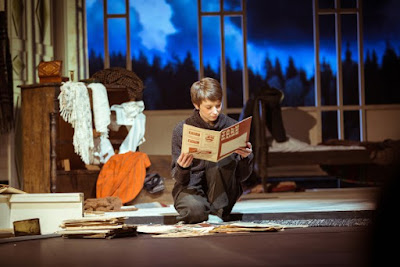 Ilse (Lauli Otsar) dreams of the times before the Soviet Union, where you could get proper toothpaste, material for sewing wedding dresses, and dish recipes. Their collective farm has fallen on hard times, with not enough labourers left to grow potatoes. It's left to her fiancée Heino (Markus Habakukk) to remind her of the benefits of the Soviet project, including hydroelectric plants, trolly-buses, and apartments - "These kind of memories only get in the way". Enter the local lieutenant Eduard (Märt Avandi) to check on them, explaining during a man-off with Heino that "Sitting by the stove and criticising the authorities is easy". As he leaves, we first experience the wondrous powers of the Ravenstone, a mysterious artifact left to Ilse by her father (deported by Eduard, for which he is deeply sorry) which apparently has the power to commit small supernatural acts, such as preventing Eduard from finding the door to exit. Aunt Berta (Piret Rauk) comes in to offer practical wisdom ("Sometimes it's good that there are some things in the world we can't change") and the local mayor Harald (Ago Anderson) drops in to ask Ilse to paint a portrait of Stalin, and to borrow the Ravenstone to save the harvest. Act 1 closes with the sudden arrival of a wounded Bogeyman (Lauri Kink, doing that role where you wait the entire first act for your big reveal, then take a break for interval), providing the cliffhanger moment spurring the second act.


The second act extrapolates the promises of the first. Ilse benevolently nurses the Bogeyman back to health in the drawing room, finding that he can only say the words "Ilse" and "Stalin", the latter referring to the almost-completed portrait. The Ravenstone has saved the collective's crops, though loyal comrade Heino "would rather die than be saved my some fairytale stone". Ilse explains the presence of the bogeyman to Eduard as a fallen Soviet pilot from Uzbekistan - until Heino makes a formal written complaint, at which point he comes to take the Bogeyman away, explaining his love for Ilsa at the same time. The Bogeyman leaves Ilse with a parting gift - a wedding dress. They both die as they exit, shot by Forest Brothers (Baltic rebels who perform a hidden antagonist role), and Ilse is left to lambaste Heino for his mistakes.

The classic realism of the play is its chief dramaturgical component, encapsulating the earnestness of the approach, and almost all of its dramatic power. Unlike many plays of Ibsen or Chekhov, The Mistress of the Raven's Stone never really gets out of second gear, happy to pass wise comment on the context and drop in the odd plot twist. Within such highly-contained boundaries, there is little that can be done - the performances are fine, the set design is beautiful, the lighting even offers a touch of magic as the weather changes. But the play suffers most prominently from the extreme limitations of its approach to 1950s Estonia, destined to be a curious entertainment and nostalgia piece, and nothing else. To be fair, it never tries - and that's the point on which I fault it most of all.

Estonian national identity is a strange mixture of self-deprecation, anti-Soviet sentiment, and civic pride. One of its key principles seems to be a kind of awkward, slow-burn comedy, jokes that sit there for a little while in the air, as if uncertain whether or not they are funny, before they simmer and finally explode. It's a beautiful trait, almost forgiving the fact that expressions of national identity are today inevitably caught up in waves of white supremacy and ethno-nationalist sentiment. (All of which makes the entire 'Story of the Centrury' project kind of complicated, but more on this later).

Locating this sense of humour inside the form of opera should be difficult, especially an opera that examines seismic events such as the formation of a country due to a meteor impact event. But it's the sense of humour that carries through in Estonian History: A Nation Born of Shock, and it's present from concept to realisation. For starters, the opera is actually a realisation of a discovered libretto and score from the inventor and scientist Manfred MIM, written at some point in the 1960s. Even as we are taken through time and space on a serious quest to discover the true nature of the Kaali meteor event, reconsidering the nature of human experience and science, the whole thing seems like, well a bit of a joke.

The opera begins with a projection of a shattered cup, which slowly reverse into wholeness, and then move back into place at the top of the table - effectively introducing the theme of shock and the concept of 'reconfiguration' at the same time. We are transported to 1462 Turkmenistan, where the protagonist Manfred MIM (Priit Volmer) meets with artist and today's former Estonian president and revolutionary figure Lennart Meri (René Soom), explaining to him his theory of the sky falling, and his intention to investigate. Returning to Saareema in 1050, Manfred explains that he has a time machine fuelled by the depression of the Estonian people, and that he plans to meet the local people, although their excessive pragmatism means that "you give them a rod and they go fishing with it. No-one listens to the zing of the fishing line". Returning to Tartu's Toravere Observatory in 1964, Lennart conducts his own research. The pair meet in Tartu's Cafe Wagner, Manfred explaining the story of the Kaali Meteorite, and Lennart deciding to help him investigate.

As a special treat to the confused, the plot then moves to Athens in the year 324, and we follow the quest of the explorer Pythea (Juuli Lill) to the site of the meteor, the Estonian island of Saaremaa. Discussing with Aristotle (Mart Laur), he pleads with her to dress as a man for the voyage, so that she doesn't add to the "ways to fail at being a woman". Not surprisingly, Pythea responds "I don't want to play in this drama" (possibly referring to the opera itself at that point). Her voyage begins as Act 1 ends. 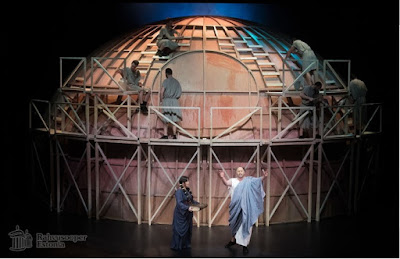 Act 2 opens with the meteor spinning towards earth in the year 800AD, accompanied by a haunting soprano (Kristel Pärtna). Pythea meets Manfred, who aids her in speaking with the Saaremaa people. What happens after that is pretty confusing - Pythea stages a play of her journey, then Manfred goes to meet Estonian composer Gustav Ernesacks in 1944, teaching him the tune to Mu isamaa on minu arm" ("My Fatherland is My Love", an unofficial anthem of the 1990 singing revolution, and generally under Societ occupation), then returning to 1960 where he initiates the building of Tallinn's Song Festival Grounds. Using the architecture of the Song Festival Grounds and the despair of the song, Manfred plans to magnify the Estonian depression to become so powerful that it can return he and Lennart to the time when the meteorite struck - and they can finally discover the secret of Estonian existence. The play ends with the pair of them contemplating the shock of the formation of the Estonian state.

All of these later plot-points are effectively in-jokes about Estonian history, pastiched together, again revealing of the sense of humour at play here. But Estonian History: A Nation Born of Shock is not just a one-liner, several remarkable features could stand proudly next to the greatest opera experiments. The cinematic half-curtain employed throughout masks the set - a giant rotating half-dome. It's my first experience hearing the Estonian language sung, and it's a powerful experience. The soprano Kristel Pärtna gives a worldly eeriness to the meteorite, served well by the score (conducted by Kaspar Mänd) which twists and turns along with the operas plotlines. Although it operates in a haphazard way, you never get the sense that the opera is spinning out of control. The dramaturgical achievement of transposing Manfred MIM's notes is monumental by itself (taking a team 2 years to complete) and marks a significant achievement within Estonian performance, as does the entire production, which was well-received by a knowing, chuckling Estonian audience.

The Mistress of the Raven's Stone

Posted by Richard Pettifer at 1:25 AM