The following article appears in Estonian cultural magazine Sirp.
Estonian readers can view it here in their beautiful language: http://www.sirp.ee/s1-artiklid/teater/eesti-ajalugu-teater-having/

I went into the 2018 DRAAMA festival as an idiot, knowing almost nothing about Estonian history, theatre, people, and culture. The experience was (therefore) full of surprises: the higher-than-expected cost of living, the local politeness, a 10pm alcohol-purchasing limit… at every street corner of Tartu I was met with something I didn’t expect. These surprises could be very good, such as experiencing a sauna on the Emajõgi, or hearing for the first time the quiet beauty of the sung Estonian language. They could also be, well, not-so-positive. And the Estonia 100 theatre series ‘Tale of the Century’ – a set of 13 works, each addressing one decade of the Estonian Republic’s history – threw up plenty of the latter. Commissioned 5 years ago, these projects made up the bulk of the English-language programme of this year’s DRAAMA, and provided many discussion points for members of the Baltic Forum (such as myself) who came from the Baltics and beyond to get a sense of Estonian theatre practice.

The decision to programme shows expressly to celebrate the founding of Estonian Independence must itself be called into question. Many artists seemed to grapple with their new function as advocates of Estonian identity, creating works that were, at best, confused by the brief, and at worst flirted with something close to nationalism. All the while, aesthetic experimentation seemed to take a seat in the second row. The latest work from NO99, NO34 Revolution, successfully continued (or re-started) the company’s experiments with movement and innovative dramaturgies, taking the transformative period of the 1910s as a counterpoint to our cynical perspective on revolution today. The opera Estonian History: A Nation Born of Shock (Estonian National Opera and Kanuti Gildi SAAL) managed to develop some new aesthetic proposals from the clash of its form and the extensive historical research (from the 13-plus members of the research team). The end result was an unexpected experiment that produced its own type of formal shock, largely through the use of speech, comedy, and silence. 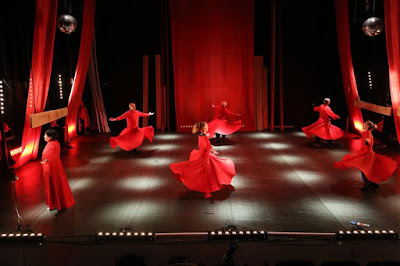 Several shows in the programme seemed to understand the magnitude of historical representation to mean the production of large-scale works. While notable for their ambition, shows such as BB at Night (Von Krahl Theatre and Tartu New Theatre) and Before Us, the Deluge (NUKU and Vaba Lava) seemed to overcompensate, generating huge, impressive, production-heavy shows which might be more suited to national celebrations in Russia or China. In both cases, the shows themselves achieved their goals – creating types of ‘total theatre’ in the form of multi-faceted and comprehensive theatre texts. However, they left little in the way of openness, and, on both counts, almost no room for interpretation. In the worst cases, the brief of representing a whole decade of a nation brought with it a kind of anti-experimental attitude, such as in The Mistress of the Raven’s Stone (Endla Theatre and Kuressaare City Theatre) – again an entirely successful show, it just seemed to be written in the late 19th century, even as it addressed the period of the 1950s.

The exception to this aesthetic trend is Journeys: Promised Land (Soltumatu Tantsu Lava) – a small show in production, but one that sticks out for the experimental nature of its approach. Rather than attempt to deal with the entire 1920s, performer Kadri Noormets addresses a specific as a metaphor for the whole: an Estonian migration event to Brazil. The performance doesn’t trade in massive production values, dealing instead in exchange and negotiation with the audience: its currency is nothing less than your own agency as spectator. In this, the performance goes into a brave new world, departing from the historical roots of the chosen frame, and reflecting on migration as a particular mode of human (Estonian) experience. Noormets channels the improvisational energy necessary to migrating – encountering, as it does, the unknown – into a kind of live decision-making and joint exploration with the audience. The result could be seen to generalise the source event, but it instead works to magnify its material through a process of abstraction, bringing us closer to its subject through radical human connection than a historical analysis ever could.

A decision-making experiment of a different kind was undertaken by To Come/Not to Come. Estonia in 100 Years (Russian Theatre). Here, the audience was invited to guide the narrative via a live voting system, with the most popular result played out by the actors. If it is what it claims (and I am sceptical, because even the 8 scenes we saw were so design-heavy that creating another 36 alternate pathways would break any budget), To Come/Not to Come is a high-level experiment in the gamification of theatre, albeit an overly cumbersome one. Sure, the future may come down to collective decision-making, but isn’t there another way to represent that than presenting entire future possible realities? Or don’t we trust the audience to use their imagination anymore?

Swallows of the Fatherland (Estonian Drama Theatre and Nargen Opera) brought out the most mixed critical response from me. I appreciate the satirical approach from playwright Andrus Kivirähk in the story of 5 small-town heroes, especially its critique of the commissioning process (in which creators share the same dilemma as the protagonists: namely, how the hell do I make a show about Estonian Independence when I am so disconnected from it?). Laying the platform for a strong critique of nationalism and discussions of urban elitism, it at some point backs away from the more difficult material, settling on a celebration of small-scale community values of courage, respect, and togetherness. Noble as these may be, the play was itching to go into more difficult discussions about the contemporary political creations of far-right nationalism, anti-elitism, and populism. This reluctance is neatly summarised by the presence of racism in the play (no less than a disgusting racial slur, actually). Ostensibly, it’s there to demonstrate the flaws in the characters, but here it is too easily misconstrued as something to be celebrated. It’s a hallmark of the confusion of our contemporary moment – caught between an impulse to uphold tradition and reject political correctness, we descend almost incidentally into hate for the other. The author tries to navigate difficult terrain – and his failure is notable.

Perhaps some of the confusion in approaches was caused by the ways in which collaborations came about. Somewhat remarkably, the process of deciding paired theatres for collaboration was done by random ballot – with large institutions randomly paired with smaller groups. Not only is this extremely likely to create a power imbalance (a smaller, independent group is easily stifled by a large institution, if they are not already sharing at least some principles of collaboration), but it’s likely to lead to poor-quality theatre art. Collaboration is listening to each other, before anything else, and pretend equality is only going to lead to closing-off, and not opening, of opportunities. It’s just far too democratic. The result created an environment where appropriation of smaller theatre groups and independent artists was reasonably common, their voices lost amidst the domination of the ‘real’ theatres. Nothing broke my heart more than the ballerinas from Vanemuise Tantsu- ja Balletikool in Million Dollar View (Tallinn City Theatre and Old Baskin Theatre) – waiting across the other side of the river for their 15 seconds of fame in the middle of the 2-hour piece, finally returning one hour later for the finale.

Making us dance to the tune of national identity seems a formula for disaster, one that quashes creativity, forcing the artist to spend their energy evading this “trap of representation” (as stated by an Estonian colleague) and creating some strange ideological phenomena. Could there be a less-timely intervention, in a moment of rising far-right sentiment and populism across Europe and elsewhere? National identity – encompassing the relationship between individual and state – is a matter of endless complexity, which can be explored unendingly through culture.  But in this moment, it feels that we need critique, not celebration.

Perhaps the true measure of a country these days is the independence of its artists. It goes without saying that I only saw a small piece of the program at DRAAMA, with some 13 other works existing in Estonian language only. Perhaps, freed from the restraints of institution, funding, and national history, these other works would have been a better indicator of the state of Estonian theatre. For now, I am left with a somewhat confused cultural impression – but I guess I learned something about Estonia, for better or worse.

Posted by Richard Pettifer at 4:21 AM