Back in Tallinn again for the mini-festival Draamamaa, which showcases internationally-exportable Estonian work to international curators. I won't have much of a function here, as such events tend towards being anti-critical and are more about networking and connections (although in a recent article in Sirp, it's also claimed to be about külalislahkus, or hospitality). Nevertheless, perhaps criticism can still be some kind of conduit to... something... operating underneath, or alongside, such functions. Maybe this is even where it's the most important.

It's worth mentioning that my visit occors in the midst of the death of Estonia's contemporary theatre stalwart, the group NO99. Rocked by the sexual misconduct of its artistic director towards a younger actress, the group last Wednesday announced that it would not continue working. Such is the interest in theatre in Estonia that 9 out of the top 10 most-read articles of the national newspaper were dedicated to the ending of NO99. It ends 12 years of often seismic experimentation, with the group and its resources to splinter across different areas or Estonian and international cultural life. I'm happy to be catching the end of it.

Anyone who has ever turned to YouTube in search of the answer to a household question will understand me well when I say: instructional videos are a new type of performance. No sooner has one innocently clicked around for how to change the back tyre on your 3-speed bike, or how to install a Bosch 3X-GT8 washing machine, than one is inevitably drowned in the dulcet tones of some well-meaning US Southerner or Northern-UK fellow (it always seems to be one of these two, although possibly that's just the things that I search for) offering his banal and pathetic - but so helpful! - step-by-step on the subject. To say it's a new genre of performance is probably an understatement: it's a cult of DIY that inserts performance into our most vulnerable situations, the questions we need to know but were always afraid to ask. Previously the realm of the mother or father, now this role is played by Bob from Kentucky, providing a safety net for our insecurities with his inoffensive and calming procedures.

It's a rich site of performance, and one milked earnestly by the performers of Workshop (actually 3 members/affiliates of NO99) - Mart Kangro, Juhan Ulfsak and Eero Epner in this situational performance. The audience enters the space and sits at a giant communal bench, covered in work-lamps. Eero Epner begins to meekly address us with the first of many instructions - a brief history of lamps in Estonian art, with the dialectical point: to look out for 'what is not in the image'. He is soon interrupted by Kangro, who offers a short lesson in how to correctly saw a piece of wood. Then it's Ulfsak's turn, and he instructs us in how to find the end of a roll of cellotape, and how to poke the key out of a doorlock from the other side. And so on, and so on, at times veering on the pointless, comic, or ridiculous (What do you do if there is no armrest on your chair? Position it close to the table, and lean your arm on it. Of course). 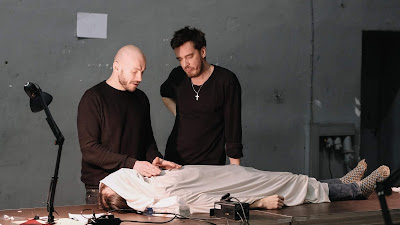 These are all relatively mundane tasks. But slowly, as the dramaturgy unfolds, there's a kind of accumulation that creeps up - sometimes, instructions are connected to one another, sometimes they refer back to an earlier instruction, sometimes even repeating the instruction of another as though it was the first time. Death intervenes - and we are offered instructions on correct treatment of a body (played with some physical discomfort by Epner) and Ancient Egypt's development of a special sheet to protect the eyes from being pecked out.

Read more »
Posted by Richard Pettifer at 3:10 AM 1 comment: