Some down-time for your correspondent today, as the two performances were so heavy on information that I could not - even with very well-executed live translation - glean a good reading of either. Both were undoubtedly 'good' performances, I was either too exhausted from the day before, or the performances themselves simply required too much of a mental leap for me. I will do my best to sketch out the directions below.

Meanwhile, the festival ticks on. It seems I've join a tight crew: each year, a delegation from Latvia, Lithuania, and Estonia visit the national festival of one of the three countries. This year, it's Estonia's turn, so I'm accompanied by 2 national delegations from the institutions of their respective countries. For many, it's not their first time doing this - in one case, a representative has been coming here for 12 of the 18 years of the festival's existence.

All of which means I am very much an outsider, which of course makes me feel a lot more comfortable. Perfect dialectics there.

Tuesday was a day of physical journey if not mental, containing tours to the edge of Tartu and then, remarkably, to the north of the country by train.

The first journey of the day took us out to Estonia's impressive National Museum, built on the grounds of the former Soviet bombing airfield called Raadi. Keen readers will notice that I mentioned this in the first post - it was one place that I planned to visit when I was here. (The other was a far-fetched aspiration to visit Lahemaa National Park, which, although I didn't quite get there yesterday, I came surprisingly close in the second performance). So, I suppose, thanks to DRAAMA festival for organising my Estonian bucket list.

Sirk's Estonia begins with a site-specific piece, the foyer of the museum used to host a group of actors (Labyrinth Theatre Group G9) walking slowly towards the doorway, which slowly fills with smoke. As they walk, they strip off clothes, eventually disappearing into the smoke. I didn't make much of this - especially since the entire second half is a proscenium-arch Brechtian performance with apparently no connection to the opening. Further, some logistics were required to subsequently equip the (many) audience members requiring audio translation, check everyone's tickets, and physically relocate them to the theatre in the museum's basement. Some of these issues are undoubtedly connected with the transfer of the piece - which originally existed in the Estonian National Library in Tallinn, and contained a slightly different prefix.

The staging of the play is a Brechtian comedy  by VAT Theatre, which presents an alternative history of Estonia in the 1930s. The play is set in a present-day celebration of Estonian director (fictional) Ernst Meel, which has initiated a play written by a famous playwright (Ago Soots). However, a young upstart writer (Meelis Pödersoo) proposes an alternative play: one centred on the life of fascist revolutionary leader Artur Sirks (also played by Pödersoo) and his attempts to overthrow the Estonian government with the right-wing Vaps movement. 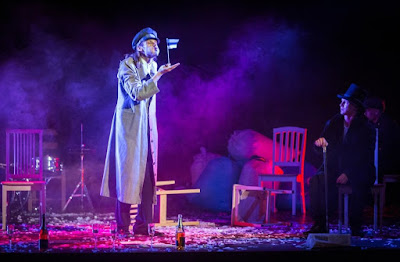 It's an approach that lets the writers (Aare Toikka and Mihkel Seeder) talk about 1930s Estonia, while's still reflecting from today's perspective. The Brechtian trimmings offer an access point to history that's educational, as does the comedic style. There are some nice lines, dripping with so much sarcasm that they could have come from the mouth of Brecht ("It's not a comedy, it's a historical drama" or "The Great Show is the foundation of Estonian national culture") as well as some which probably wouldn't ("Are there any female characters?"). The addition of the Woman's Choir of the National Library of Estonia, who assemble at the back of the theatre and sing responses to the action (sometimes in sweet harmony, and sometimes atonally), completes this play's credentials as the most Brechtian thing that has ever Brechted.

Read more »
Posted by Richard Pettifer at 2:48 AM No comments: