I am Lucky, by Leonid Kaganov

The twin drivers of human progress during the 1800s – the Science of the Age of Enlightenment and Productivity of Industrialisation – broke down at about the same time. The endpoint of Science was the atomic bomb, that pinnacle of scientific achievement that brought in the option of wiping out entire cities with the push of a button. Efficiency and productivity were taken into unintended territory by Nazi Germany, when they were applied to ethnic cleansing and forced labour camps – transforming the unclear blob of humanity into an efficient mass, and cutting away the 'excess'.

Both of these events showed just how far the human being had departed from rationality and ethics in a quest for progress by which just about anything was justified. When they both collapsed suddenly, there was now this giant spiritual vacuum, a lack of direction for the human project.

Happily, we had a neat replacement, neo-capitalism, with its key objective of resource exploitation and growth coupled with an illusory endlessness, perpetuated by a mechanism of manipulative fabrications commonly referred to as consumerism, promising to fill that void with escapism, fantasy and sensation. These two drivers are our new gods, (combated, albeit, in retrospect, a bit hopelessly, and at times itself appropriated by its big brothers, by a broad movement called ‘humanism’, which took shape in arts and culture).

But, naturally, these two prongs have weaknesses. And what happens when the party’s over?

There are two ways artists can address this spiritual gap, a quickly looming train wreck. They appear, on the surface, to be very similar, and they often involve going back to basics.  Who needs consumerism anyway? We can have Butter-bread! Together! We can share it with each other! Quick, break it in half and give it to your neighbour! Just like we used to when we were kids! Isn’t this beautiful?

So what’s the difference?

Read more »
Posted by Richard Pettifer at 2:27 AM No comments:

It appears that the festival has come under attack for staging Antigone in the ruins of the church within the Castle grounds - which you can read about here.

International readers will be familiar with this narrative. There is certainly an argument for consultation with community groups prior to performances in found spaces, when there is the potential to accidentally transgress. On the other hand, it is incredibly hard, and incredibly special, to perform in a found space.

I found nothing insulting or sacreligious in the staging of Antigone, a fairly classic, stylised interpretation of a classic text, in this space. It is obvious to me that the counciler in question did not see the play, and so just how he is qualified to comment based on the totally incorrect perception that "the performance brought the theater that presents itself as postmodern, and this is inherent in the fundamental disregard for the holy things" (bad Google translation but you get the idea).


I admit to not understanding the full context of the comments, but I can't help thinking that this is a reactionary response from a counciler looking to shore up conservative support. It shows a totally naive knowledge of postmodern art, emerging as it does out of a spiritual vacuum, and a lack of information about the play itself (which actually I would not have classified as postmodern art).  If you're hanging Sorrano's Piss Christ, I agree with you. This was not that.

It is an insult to all of the volunteers and workers who made the festival so special.


Posted by Richard Pettifer at 1:12 AM No comments:

Day 2 held a fair dose of five shows in one day (clearly too much for this critic), and the first of these took us into the ruins of a church in Lutsk Castle.

This was a heightened ritual performance, belonging firmly in the classic Greek theatre tradition, laden with gesture and symbolism. Two actors (a business suited Chistokletov Evgeny, probably mostly occupying the role of Creon, and Olga Chistokletova as Antigone) took us through the story of Antigone’s defiance of her role and the state. 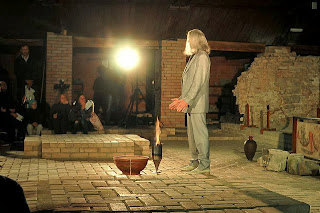 The subtleties of the text being (clearly) lost on me, I was left to focus on symbolic elements. These were a scope of timeless metaphors – sand pouring from a bowl, a lit torch, and it was, as far as I could tell, falling clearly within the traditions of Greek theatre – with the clarity of its universal symbols guiding the focus, and providing some stark moments that illustrate clearly the hierarchy of gender and power.

NOTE: A small scandal has emerged regarding this play's location in the ruins of the church, which I explain a little here. Suffice to say - it makes for sad reading.

Orchestra sat firmly in the realm of farce, blending exaggeration with ridicule. The target here was apparently gender relations, though I left thinking it hadn’t quite hit the mark.

"The Incident” (or the Case in Subway) by N. Bayer
‘The Bronx’
Theatre-studio Splash, Kiev (Ukraine) 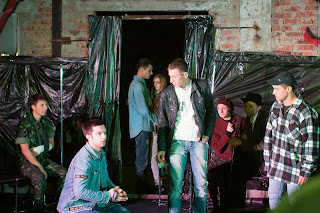 Photo - Pavla Berezuka
Read more »
Posted by Richard Pettifer at 12:27 AM No comments: