I've often admired the capacity of the German theatre to address, appropriate, and problematise philosophy. Naturalist theatre traditions seem to me much more prone to fall into circular 'common knowledge' where familiar ideas are circulated around ad nauseum. In Germany, it has seemed to me, there is a long tradition of the theatre being a place where one can go to access difficult ideas in public. There's an embarrassing element to this - everyone collectively engaged in thinking in front of one another, but at its best it combines intuitive and cognitive learning into the kind of 'shared learning ritual' that you just don't get in a public lecture.

Vierte Welt has launched a new performance series in which it invites philosophers to write for the theatre. Im Toten Winkel 1 is an ambitious first attempt. The first performance comes on the back of 10 days of workshopping by the company in the performance space, which will be followed by two performances later this year, which I understand will be of the same text.

The text is about as translucent as you might get in the theatre. Based around the loose concept of the 'Plebs', it picks up from Foucault's theorising of the term in several texts of the 1960s and 70's and proceeds through a number of narrative examples, each elucidating a new angle on the concept, or perhaps complicating it further. 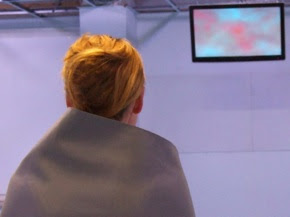 The staging by Dirk Cieslak takes the theatrical form of a dialogue between two actors who "seize" the text while the philosopher "with narcissism, cleans his glasses". The actress (an uncanny Mariel Jana Supka) takes centre stage. while the male actor (Marcus Reinhardt) stalks the outer area of the playing space, delivering crystalising thoughts and giving voice to the bulk of the stories.

If this sounds text-heavy, it is. As a logical result, most decisions seem aimed at sharpening the dialogue into a manageable idea, for both the audience and the collaborators. This mostly takes the form of extremely precise movement and speech, mostly devoid of emotion, and a taut atmosphere, carefully crafted. The comprehensiveness of the play is probably not aided by some screen-saver like visualisations on the screens behind, which occasionally give the literal shape of something spoken, but mostly flail in what look like some of Mark Rothko's dreams.

In my view, most attempts to deliver such heavy philosophical material to an audience are doomed to fail. If it succeeds, it tends to do so spectacularly - but there are some nearly impossible hurdles to overcome. There's a reason that philosophy and theatre are different practices. The traditions are, despite what I said earlier, entirely different - to understand philosophical concepts you must really read philosophy. You can't read Zizek without Lacan, you can't read Lacan without Freud etc. Theatre is, at least partially, intuitive.

But this is no reason not to try, as philosophy is extremely important - the dissemination of high-level ideas undoubtedly has a democratic function - and not everyone has the faculties to engage it. So try valiantly, which Im Toten Winkel 1 certainly does. What it gives is an incredible dissection of a murkey concept which may well have its best application to European neo-xenophobia.


""the" Plebs doubtless does not exist, but there is "something" Plebian in the bodies and the souls which exists in the individual, in the proletariat, in the citizen, but in different extensions, forms, energies and origins." Foucault, Maechte
und Strategien" (Powers and Strategies) 1977, (from essay in the flyer by Maria Muhle, Professor of Aesthetic Theory at the Merz Academy Stuttgart)

The creation of plebs appears contingent entirely on context - they are not self-determined, but emerge from the creation of a ruling class and a proletariat. This has a natural application in current debates over  various projects of nationalism and 'border control', both inside Germany and elsewhere. Anyone can be a pleb, depending on context. It's a great equaliser.

Such an association is not an unwelcome contribution to public dialogue in Europe at the moment, although it is by no means directly made. Which begs the big question which left both myself and my co-spectator as we spilled out into the night - did this text need more embedding in the 'real world'?

On the other hand, interpretation is also a democratic right, and a heavy hand would no doubt risk putting the text in a box it just doesn't suit. This is difficult and brave work, and no doubt will reap more benefits come October.

This review assisted by Sonja Hornung.
Further programming of the Im Toten Winkel series can be found at viertewelt.de/Aktuell.html
Posted by Richard Pettifer at 7:20 AM