It's important not to think of Radical Feminism as a period which lived and died in the 1960-80's - and this was indeed the time when the Women's Liberation Movement, backed by a wave of radical intellectualism and activism, invaded the workplace, the home, and the family unit. This era had its predecessors (and its successors). Ask Emma Goldman. Ask Shakespeare. Ask Elizabeth I. Arguably, radical feminism has its beginnings back when the pen hit the paper of the first Christian bible when Eve was "cast from the rib" of Adam, (perhaps one of literature's initial oppressive acts). The roles women have played, often under duress as the second-wave movement pointed out, have been questioned again and again in the theatre - mostly by men, and mostly in a way that has a limit to its radical power.

For a text that's almost 2500 years old, Medea, a story in which a mother murders her children, has a surprising amount of radical potential. It has always struck me as a text which takes a impossible position, "I murder my children", and spends the rest of its pages failing to justify it. In doing so, two of humanism's great ideals - the right to emancipation and right to life - are split directly down the middle. Is Medea's an action of liberation - a sort of absurd protest? A violent rejection of the child-bearer role? Or another example of human failure, a result of the irresolvable crisis of a woman torn between her supposed obligations and her freedom? 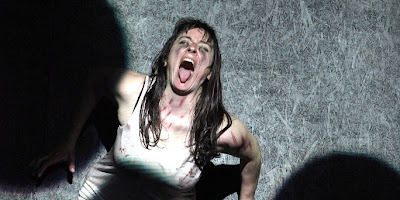 Right from the opening, the Frankfurt Schauspielhaus production places Medea in the interrogation chair and proceeds to unashamedly take her apart. The stage space is a wall divided in two - on the top level is Medea, free to roam above us, yet undeniably trapped, while all other characters mill about on the ground floor. The effect is a kind of pedestal - clearly we know who is the focus here, and it's not long before Medea (a tremendous shape-shifting performance by Constanze Becker) is pressured into the full range of emotions and roles - sliding from temptress to hag, motherhood to the juvenile. In fact it is Medea's sheer transformativity that seems her defining trait - and any reader of feminist literature will tell you, when we're talking about power, 'changeability' can go either way (the figure of the Femme Fatale springs to mind as an example of the transformativity of women being potentially disempowering, for example).


Regardless, this structure places clear and simple spotlight on Medea, and the audience is left to evaluate the moral and ethical basis for her action and her attempts to justify it.

To that end, she doesn't come off well. I have always been curious about Euripides' argument here for, as my companion pointed out to me, there is no possible justification for a mother killing her children, and nor can it ever be an action of liberation.  From the perspective of humanism, death is always the least preferable outcome, a perspective which dominates the debates on euthanasia (where the right to life can become virtually a duty), abortion (where it is invoked as a argument against), gun control (where it is invoked as both the right to protect and the right to life in a safe society), and so on. Is there a situation where such an action is justified?

Here, I couldn't help thinking, we have a male director and a male writer. You cannot ignore the gender question in Medea. Euripides, as the male author and ultimate authority, leaves himself is open to the criticism through his own ambiguity towards Medea, flip-flopping between sympathetic and disgusted perspectives (sometimes within the same scene) as Medea herself transforms. For a male director attempting to re-author Medea, the key to the engagement becomes one of successfully managing these perspectives, and perhaps ultimately choosing between these two positions of 'saviour' and 'torturer'.

For me, director Michael Thalheimer has a little each way here. Medea's exposed position, literally a sitting duck, creates an automatic distance from the audience, as does the sheer physical violence she is put through in order to achieve the performance and the reduction of the play to almost pure text, (to the extent to which, as one colleague pointed out, it could have nearly been a radio play). On the other hand, at no point are we refused access to Medea's plight - the opportunity for sympathy is always present.

With one notable exception. Because in the end, all of these questions give way to an, at first, ridiculously kitsch sequence of projections, beginning with the symbol of 'Woman' commonly found on toilet doors, and proceeding through a series of symbols representing a strange flashback sequence of the tragic story itself (as well as some extra speculatory backstory). To be fair, this seemingly unnecessary addition became surprisingly meaningful as it continued - there is something about seeing the story communicated in 'official' images that brought it crashing into contemporary life with some shock. I still felt it was an escape hatch to key questions. Was it an attempt to broaden out the key questions of the play into a question of the symbolic order? Or just for those of us who didn't get it?

I doubt it was the latter. But if the attempt here was, indeed, to draw the narrative into wider relevance, then there remains a question of why you would feel the need - the play being thousands of years old and performed countless times across the ages. There is plenty of scope within Medea itself for a contemporisation of its themes, and the key to this for the production team was probably much more old fashioned - the reading of the play.

Premiered on 14 April 2012.
Haus der Berliner Festspiele
Posted by Richard Pettifer at 4:39 AM