The festival began with a mid-afternoon opening ceremony, and went on to some performances in the afternoon.

If I could, I would describe the opening ceremony, and my experience of delight, warmth, and confusion as I stepped onto the toy tram, in hand an old suitcase emblazoned with my name in Cyrillic lettering, being announced to drum fanfare and stepping out into a surprisingly large swarm of local press in a carefully orchestrated spectacle that still had something beautifully earnest about it.

Nova Linia is a hardware warehouse in Ukraine (the Australian equivalent is Bunnings). It was the venue chosen to host my performance, which opened the festival.
It was an incredible experience to perform in this place, and the irony of performing a political work in an icon of capitalism’s new frontier was perhaps funny only to me. I wore a t-shirt emblazoned with a defence of protest, and slowly made my way through the work.

How was it received? I honestly don’t know - which is maybe a good thing. Once again I was pleased with the conversation afterwards, a complex one about the usefulness of political action. 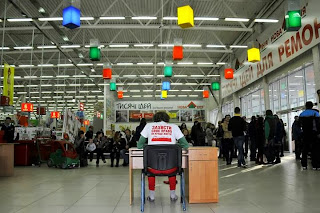 Read more »
Posted by Richard Pettifer at 10:53 PM No comments: