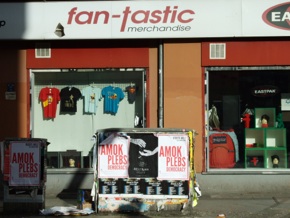 Of the various dilemmas which define our world today, the problem of ‘distance’ is maybe the most unsolvable. The idea naturally refers not only to physical distance but to perceived distance, that is, the gap between the ‘self’ and the ‘other’, which is a space manipulated for (often suspicious) ends. The same person who would never point a gun has no hesitation of sending an army into war, people who are greatly concerned about climate change feel no pressure to change their lifestyle, people without any xenophobic intent will hold preconceptions about people in far-off countries who they have never met, and with whom they don't have anything in common.

Overcoming this distance (if you like, a ‘fourth wall’) is one of the primary hallmarks of today's great theatre, and if you like an authentic stream of contemporary theatre's humanistic project. Whereas the media reinforces the distance, great theatre collapses this perceived otherness, and, for a transient moment, shows it to be what it is - constructed.

I was pleasantly surprised by Vierte Welt’s first attempt at articulating Alain Brossat’s  Im Totem Winkel, mostly because it felt like an earnest and sincere failure at coming to terms with and recounting philosophy. Philosophy has a different kind of distance - something like an elitism or removedness from everyday life, and I was surprised by the attempt to cross this. Mostly I was surprised by its lack of irony or theatricality. It was a simple, dry delivery of a dense, almost inaccessible concept. At many times it resembled a lecture. We (that is, my able guide through the German language and I), were generally in accord that this was an honest approach to difficult material. But we had an obvious question afterwards: Where exactly are the Plebs in all this?

Where, indeed. Approaching the alien-pentagon-like surrounds of Vierte Welt for Part 2, my accompanist and I were met with an actress familiar from Part 1, Mariel Jana Supka, gazing out hopefully, anxiously, into the streetscape.
This somewhat odd seed having been planted, we entered the space, arranged into a promenade with the outside world as a backdrop, and just two full-length mirrors, carefully placed on their side next to some silver markings on the floor. We are told by the excited actress (joined by Part 1 accomplice Marcus Reinhardt) that they are waiting for a real-life Pleb (!), a Mr. Cliff, and that he should be here any minute, and that when he arrives the show can begin.

“Nobody gets raped by the individual he portrays; this individual is not the spectator himself but his neighbour”


Predictably, Cliff never stumbles in. The ensuing delay is used to awkwardly explain to us, in very meta style, what went down in the first play. Some of the old favourites are back – the mouse and the soldier, and the reference to Wuthering Heights and its plebeian themes. As the anxiety about Cliff rises, the actors start to explain, rather patronisingly, some characteristics of him – he goes to Poland sometimes. He works on the roads. He is always getting into trouble with his car insurance. He is has some relationship with the actors but it's very distant... he is the actor's ex-girlfriend's friend's friend, or something. The actress periodically walks out and searches, anxiously, whilst the TV screens show scenes of the space outside, also seemingly watching for him (or watching him). Finally, the actors decide that enough is enough, and embarrassingly concede that the show must go on without him. They close the door, and the ‘real’ performance begins.

The male actor begins to talk about his new neighbour. The first night, while the actor is out on his balcony enjoying a Becks, the neighbour goes out onto his balcony opposite, wearing a trashy dressing gown and sunglasses, and proceeds to drink a beer while playing The Clash too loudly. The second night, the same. And on the third night, the actor finally loses it, and throws his bottle (also Becks) at the man’s balcony. Here it’s not clear who is the pleb, as the actor is guilty of the very thing he accuses. Though the actor goes to some lengths to justify his position (“I live in a home run by the unions. Of course I was on my balcony. Naturally, I was drinking a Becks.”) and to devalue the other (he was fat, disgusting, lives in the crass style of the new rich) and when the actress joins in (“he is the kind of person who just protects wealth, these people should not exist", and so on), it’s clearly done with a touch of irony.

The actress’s subsequent blast of supportive xenophobia describes acutely how ‘plebs’ can be simply a floating term, employed at will, and designating a distance. Where once the plebs were objects of pity, now they are objects of hate – regardless, they are always objects. They can have political effect, but they aren’t themselves political beings.

The theatricality of the approach has its advantages, not least because it provides such stark difference in approach to Part 1. There is more exploration of distance, and more use of analogy and metaphor. The effect is the construction of a space that’s outside the real world - itself distant from it. After all, isn’t this term ‘Plebs’ in the end merely a tool of language, a distancing mechanism – not so much to say “they are” as “I am not”?.

It would be wrong to summarise the difficulties in distinguishing oneself from the Plebs, and indeed the paranoia of the pair seems more the target here anyway. It is this neighbourly anxiety which determines so much of human behaviour, this narcissistic fear of the other, as if the plebs might somehow threaten one’s identity by being too close to it, and reveal the sickness beneath.

Operating in a quite obscure no-mans-land of language, this uncanny space is valuable not so much as a defense against a particular type of distinguishable distancing or othering, but as a rigourous examination of the functioning of the language mechanism itself. Largely, it must be said, this mechanism is invisible, and escapes attention whilst remaining a dominant presence in human behaviour.

Directed by Dirk Cieslak
Mariel Jana Supka, Marcus Reinhardt
Based on the text by Alain Brossat, Professor of Philosophy at University of Paris VIII

This review was assisted by Sonja Hornung.
Posted by Richard Pettifer at 11:32 AM