Every year, with even regularity, I say "never again". And every year, I swear that’s true. And every time, the next year, somehow, I find myself back for another Faki Festival in Zagreb.

This year (the 5th for me) will be a little different from the normal – I am joined by Lithuania’s superstar critic Monika Jašinskaitė, and we will publish edited versions of dialogues every day of the festival. These will replace my normal review/diatribe format. Dialogues should probably be more popular than they are as a way to write criticism – I know for me, I’ve never pretended my view is authoritative, there is always a (visible or invisible) counterpoint. We hope to bring useful, provocative discussion to these pages over the next days.

Faki 22 takes the theme of ‘Inequality’ – a theme that, whilst it dominates people’s material wealth and life circumstances, rarely gets attention corresponding to its defining position. The reason why is up for debate. Too hard? Too negative? Too much chance that it might have a real effect on something? Take your pick. It’s a holding pattern that creates one of the paradoxes of our contemporary situation in developed countries, that as things get even more precarious, leadership creating the precarity grows in strength. 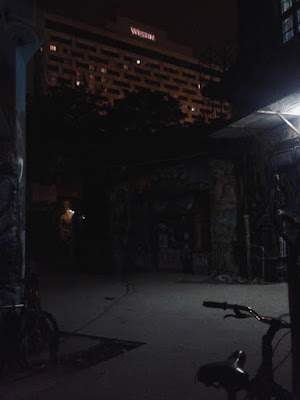 The view of the neighbouring Westin Hotel, from the courtyard of the former medical factory Medika - host of Faki Festival 22.

The big recent exception was, of course, the Occupy and related movements of 2011-12, where inequality came to the forefront of public discourse, and certain inalienable truths – like 26 humans holding over 50% of the world’s wealth – began to become widespread. Off the back of this, Thomas Piketty’s Capital in the Twenty-First Century (2012) presented, not for the first time but perhaps in the right moment, the argument that inequality was reaching a point where it was becoming the major hurdle to the continuity of capitalism itself. Together with accumulated pressures, inequality, and our collective inability to address it, likely pushes us into territory where extreme choices must be made.

Read more »
Posted by Richard Pettifer at 8:33 AM 3 comments: