"The rain will not erase it" - Interview with Mladen Alexiev (BG)

Mladen Alexiev (1980) is a theatre maker from Bulgaria. He partecipated to the Terni Festival 2014 (www.ternifestival.it) with two different works called “Standing Body” and “A Poem”, giving the name “The rain will not erase it” to the entire Festival.

By Carla Capodimonti and Richard Pettifer
Available in Italian at http://fattiditeatro.it/the-rain-will-not-erase-it-intervista-mladen-alexiev/

Carla Capodimonti: I found your works about “walking” very interesting. In the history of art we can find a lot of examples and inspirations about walking: in 1921, Dada organized a series of guided tours to various trivial places in the city, in the 50’s, the Letterist International began the 'theory of drift' which turned into situations experiencing creative and playful behaviours and unitary urbanism. Constant reworked Situationist theory to develop the idea of a nomadic city (“New Babylon”) introducing the theme of nomadism into architecture. From mid-century, artists started to use walking in nature as art. In 1966 the magazine Artforum published the journey of Tony Smith on a highway under construction. In 1967, Richard Long produced “A Line Made by Walking”, a line drawn by trampling the grass of a lawn. Since 1995 the group Stalker conducted readings of the cities in different parts of Europe from the point of view of wandering, to investigate the urban areas and the contemporary transformations of a changing society.1

Did you find some kinds of inspirations from the history of art for your work called “A poem”? What is your definition for “walking poem”?

Mladen Alexiev: Actually, the starting point for the intervention “The rain will not erase it” is that I did in Amsterdam in the Autumn of 2013 and its follow up – the photographic project “A poem”, developed in collaboration with the Italian photographer Eleonora Anzini and presented in the frame of the last edition of Terni Festival - originate from quite opposite interests of mine. For quite some time my fascination has been not with the act of walking but, instead, with the act of standing. At one point in my practice I wanted to strip down everything I know about theatre-making. I was thinking – what is the minimum physical expression an individual can do without any special preparations, what is the minimum (political) statement a single body can make? And I have chosen a simple entry point – a body enters a space, its appearance is already a statement – inevitably.
It is not about the walking but rather for taking a stand. Literally. To hold yourself back. To make your body visible through imposed discipline. To leave it somewhere. To deny the body the right to move, to make an attempt to put it into halt. I am touched by the state of emergency that this simple act suggests.

So I am not interested in the history of art in the first place. At one point in the process, links and references naturally occur. But I find it quite suffocating to have it as a starting point. In the end, the history of art is a graveyard in which we find ourselves aspiring or ascribed to certain lineages, attempts and illusions. Our loves make it alive. 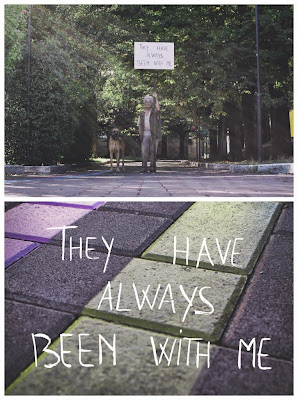 
Read more »
Posted by Richard Pettifer at 4:16 AM No comments: