Confession: Estonian theatre is not an area I'm particularly well-read in. Second confession: Nor is Estonia generally, in fact. Nor any of the Baltic countries, which seem to have their own EU, sandwiched between Russia, Poland, and Scandinavia. What I know of the country I know from friends, or the occasional traveler's tales. Sometimes, small oddities appear in relation to the activities of the Soviet Union - for example, the significant bomber base at Raadi or the secret submarine research facility in Lahemaa National Park (not quite akin to the military dolphin training facility in Simferepol, but at least a little curious). 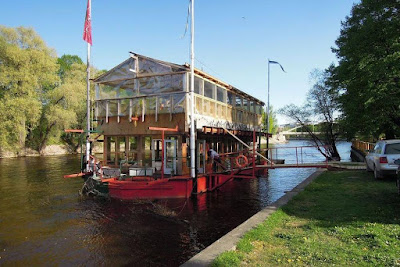 One of the festival venues, 'Sisevete Saatkond', is also Estonia's oldest riverboat (a century old, in fact).


Nevertheless, here I am in Tartu, Estonia's 'second city', preparing to spend the week writing about Estonian and Baltic theatre as part of the annual DRAAMA festival. Like many other second cities, Tartu has a reputation for being quietly superior to its bigger sister (the capital, Tallinn) with a huge University population (about 20% of the city) and a significant amount of government installations. Sure enough, Tartu is filled with cultural institutions, and with a population of only 100,000, walking around the city's monolithic structures, one feels there must be one for every 1000 citizens.

Read more »
Posted by Richard Pettifer at 5:56 AM No comments: