I'm just going to be honest: having arrived at midnight and madly scrambled to finish of my remaining deadlines, Day 2 of Faki (my first day) was one where I chased my own tail and tried desperately to make up for lost time. Such is the nature of this year's festival - normally precarious, this year it's built around a set of circumstances of eviction and withdrawal that are not necessarily conducive to art - which sometimes functions better in conditions which are less improvised.

Inevitably, the art and artists shone through anyway, and if there's any pressure, it didn't show in the performances. The day began with Blackism Collective's Back To, partly coming out of a residency at the festival, moved on to Sifiso Seleme's Extra Ordinary, and finished with a forum, led (a bit shoddily) by myself, regarding the responses to the call out from the festival. More on the latter later.

New Berlin-based collective Blackism –consisting of performance artist Nasheeka Nedsreal and actress Adrian Blount and dedicated to ‘decolonizing our entirety and centering blackness’ - bring us Back To, the result of development at Faki festival, following months of research.

The performance sees the duo slide through various ‘modes’, proceeding through some key texts regarding black identity. Poet Langston Hughes’ Notes on a Commercial Theatre appears, as does rapper Wale’s Black is Beautiful and sections from playwright Lorraine Hansberry’s Les Blancs, as well as intersectional feminist and social activist bell hooks. Two white masks are employed by the performers, probably a representation of the white identity forced upon people of colour. This is reinforced with a clever reversal of the household phrase “do unto others as you would unto yourself”, spoken like a prayer by Blount behind the white mask, before its sudden removal and twisting of the phrase into an accusation on the repetition. It points at a particular truth – that, in the reality of race politics, 'do unto other' means something quite other to its literal interpretation. 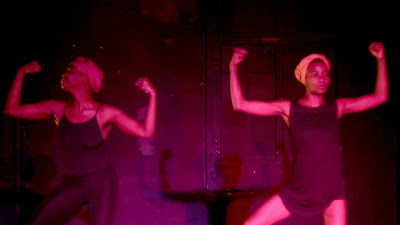 The choice of dance shows a fascination with various styles – from schoolyard ‘clap games’ to ballet. Moving through the transitions leads the performers into fairly impossible singing positions, although I’m sure people in opera would be squirming in their seats. They carry it off incredibly, and I don’t think I’ve seen a note maintained quite so well while the torso is twisted at 90˚.

Read more »
Posted by Richard Pettifer at 5:03 AM No comments: