There's nothing like having your brain blasted out by Croatian punk, that stuff goes into your ear and directly through the vital organs of your body. I think my pancreas is still vibrating from the night before - who knew a drummer and a strummer screaming incomprehensibly into the microphone could still be so liberating. I thought the days of rewiring your reality through simple excessive force were over - how wrong I was.

Today the former pharmaceutical company Medika is reveling in its post-thunderstorm state, the fires of nature having swept through the bricks, glass, and wood. Unfortunately, it didn't sweep away all of the remains, with one visitor making his profound statement of resistance in the form of excrement on the floor of one of the bathrooms. Of course, the body is necessarily involved in any meaningful struggle, but... still... hygiene is one of the gifts from the field of medicine to which even the staunchest supporter of revolution should adhere. Compromises (of certain kinds) must be made.

Once again I am blessed with just a single review today - Collective B's work-in-progress Wonderful World. Tomorrow should be just a little busier, with multiple shows to write on and 2 reviews to try and concoct. Fast turnarounds are a bit of pressure, but I also acknowledge that they are what makes the writing I do here a bit different, even if there are some irritating mistakes that I only find out about much later. There's some act of direct channeling going on, or something.

One of the things that's special about theatre is its changeability. As a mirror of society, it can adapt itself to circumstance. This includes formal considerations, where the different practices of artists can be arranged and rearranged in ways that offer particular energies, and resonate with particular circumstances. Consider, for example, the Dadaist approach to the theatre, where forms clashed and mixed, often producing a particular type of violence in their formal clash acting as portent to the violence to come and just passed. (As opposed to, say, former Volksbühne Intendant Chris Dercon's vaguely-defined hybridisation, where artists from different fields come together in event-based formats to sell a diverse mix of aesthetic approaches, creating a kind of grey mess of visual and auditory stimuli. But more to come on this at a different time).

These days, a reading of the world according to violence is at once legitimate and not. Legitimate, in the sense that - despite the hockey-stick graphs of living standards in the African continent often used to justify development - there is plenty of evidence that the world has never been more violent. Illegitimate in the sense that, with this heightened violence, our mechanisms for sterilisation have become more pronounced. So today we have evolved to an extent that it is possible to live a life completely cleansed of human suffering, even if that suffering is literally on your doorstep (Medika's proximity to the Westin might be a relatively tame metaphor - the coexistence of slums and luxury apartments in Brazil or India more apt).

Artists have been operating at the frontier of these collisions of wealth and poverty for a long time. Lately, there have been signs of returning to forms of more direct contact with violence from artists, of which the field loosely termed 'art activism' is perhaps a tame example, but artists such as Petr Pavlensky, Eugene Ionesco, or pre-Adidas Marina Abramović  attempt to cause a confrontation with this largely sterilised violent reality. The current United States presidency, in cahoots with other political turns, seems to have, if anything, further accelerated this sterilisation, neatly diverting the expression of reality into more simulation and staged protest, forever playing catch-up to a perpetual state of crisis.

Formal play might seem a relatively tame response to current goings on. My experience in the theatre suggests otherwise, and that as an approach to violence, it remains a key tool in rocking the established aesthetic order, creating a sense of shock or destabilisation that is directly humanising. When it's done well, and combined with ambiguous or multi-faceted potential readings (a hallmark of physical theatre), it can reach to our very primal understandings of western hegemony, and the violence that sustains it.

Wonderful World, developed on residency at Cultural Centre Attack in 2017 and performed by two actors (Sonia Borkowicz and Elsa Mourlam ) and three musicians (Tomas Novak, Christopher Haritzer, and Voland Szekely), begins with a hesitation. The actors collapse onto the stage with a loud crash from behind the audience, with one character dressed as a bimbo and one as a kind of toy soldier. Their movement is immediately stiff and wooden, and accompanied by breathy contributions from the on-stage orchestra (comprised of bass clarinet, violin and percussion), who occasionally interject with eruptions of sound. 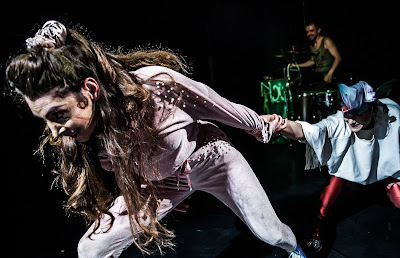 The characters proceed with an acrobatic set of movements that doesn't ever  resolve, and adopts a stop-start rhythm, full of bursts and silence, and accompanied by the almost-playing of the orchestra. The two figures seems to pass each other by, never quite connecting, and occasionally addressing the audience directly with questioning stares. They spend a good percentage of the play's 40 minute duration on the floor, although there is a suspension of time occurring within the world. The unholy green lighting throughout offers penetrates the piece with a feeling of fear. There's a sense of urgency within the piece, attacking a direct yet unseen target, that is as menacing as it is unspecified.

Read more »
Posted by Richard Pettifer at 10:07 AM No comments: