Within the elaborate, hyperbolic mythology of Berlin, there's the rabbit-warren of Kreuzberg - a microcosm of fabrication, a hall of mirrors. Take a wrong turn here and you're lost in perception, forever trapped between echoes, jumping at shadows, believing in things which can't be true, and building a future that feels unreal.

Zoom in, and within the city's surrounds, there's Kotbusser Tor - 'Kottie' - a place famous for anarchy, as a melting pot for the growing pains of 90's Berlin, where the blend of Turks, neo-Nazis and Police publicly negotiated their co-existence amongst Ossies and Wessies. Going through here, even casually, it's quite clearly filled with a very recent, very dramatic, history. Hell - even the circular topography looks amphi-theatrical. 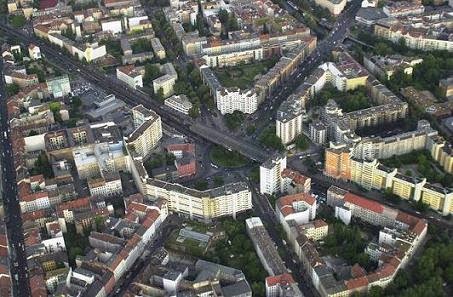 Harnessing this complex political space holds both a challenge and obvious potential in the work Nasty Peace, a site-specific audio tour of Kotbusser Tor staged by the group Copy & Waste in collaboration with the English Theatre Berlin (which is located in a different part of Kreuzberg). The work is broadcast in three different languages (Turkish, English and German) where participants can access narratives of its history and mythology, and contemplate its - inevitably capital-dominated - future. The war over capital development in this traditionally anti-development location is the cause of much debate in Kotbusser Tor, in Kreuzberg, and in Berlin, and gives this Nasty Peace it's title, and it's key theme.

Read more »
Posted by Richard Pettifer at 12:44 PM No comments: