Day 2 took me to the Cockpit Theatre in North London, historically the venue for the Voila Festival in its previous French-focused manifestations. This year's edition has expanded the number of venues from 1 to 3, incorporating both Applecart Arts in  Stratford, and Etcetera Theatre in Camden. The three venues are widespread - with Etcetera and the Cockpit sharing a little corner of North London, and Applecart Arts being something of an outlier in the far east. It's a situation the festival has used to its advantage, encouraging a cross-fertilisation of culture among different areas of London.

The evening ended with esprit de corps' accomplished Hyperion, based on the text from German poet Hölderlin. Coming off the back of a season at Edinburgh, I am amazed to find no significant critical writing about the work so far (at least, not that google provides). Unfortunately I won't be the first - as I missed the beginning of the performance (gotta listen out for those bells...). Nevertheless - Hyperion clownifies Hölderlin's novel about solitude, borrowing selectively from the text to generate a kind of comptemporary ode to humanity's isolation. It's a perfectly executed performance, deserves more attention than I can give it here. Suffice to say - it's a welcome addition to the festival program, and indeed would be to many others.

Prior to that, UK-based duo Przymierska Morgan (Margot Przymierska and Nicholas Morgan) present an ensemble performance of Crossing the Line, in its second performance after a development at Rich Mix. The show takes the form of a series of fast-moving vignettes, stolen from TV and film, arranged around the theme of ‘borders’. The ensemble change accents, personas, and roles in rapid-fire succession throughout, with locations and situations transforming from a meeting between politicians of GDR Germany and the USSR to a mistaken border crossing from Mexico into Texas. The situations twist and turn, plummeting the audience into the daring night-time escape across the Berlin wall, to a karaoke performance of Elton John’s Nikita, all the time rotating around the central object for examination. 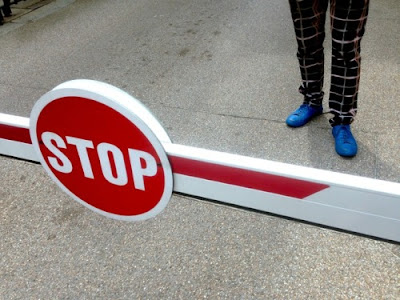 It’s an interesting and weird object of study. Borders occupy a troubled place in human history, representing initially a way for governance to be defined, and lately an oppressive tool for the nation state to assert its dominance over people. There are many times when their existence is vague, or a purely arbitrary ideological tool. Neoliberalism would have us live in border-free societies, in the meantime, creating conditions in which the border ironically reinforces itself.

Read more »
Posted by Richard Pettifer at 4:49 AM 1 comment: