Warning: comparison with the video game Call of Duty follows...

Weapons export and manufacture is one of those weird areas of economics - like the market for oil, it kind of determines a lot, without being talked about in a meaningful way. Arms trade can determine alliances, which can determine information sharing and spy networks, which can determine cultural ties, which can determine how a conversation between an American and a German plays out in a bar. Likewise, for many unexplainable global events there is a military explanation - but like a report of new climate science, it just doesn't make a good media narrative. People don't wanna hear that they are slaves to a giant military machine that's operating virtually without ethics, regardless of the level of truth to that depiction. And there is at least some truth. Make no mistake - despite the liberal pomp about disarmament and stability, the world today is buzzing with military activity. With each passing year, the armament of the world grows ever-larger. (And no, I'm not talking about Iran or North Korea).

Weapons trade is particularly pertinent in Germany, which makes a hell of a lot of them. While post WWII Germany is careful not to appear military in its direct interventions,  when it comes to manufacture and export of weapons, the same care is not always shown. Thankfully, the issue has some visibility within Germany, or at least in Berlin, thanks largely to the presence of a vocal radical left wing which brings these things to dialogue, and a conservative bastion which, though interested in profit and exploitation, is also (mostly) willing to listen. This has the effect of keeping tabs on where weapons are going, and ensuring, to a degree, that those destinations have some justification beyond profit. If armament can ever be truly justified. Anyway.

Situation Rooms, a new work from German political theatre pin-ups Rimini Protokoll, is a participatory theatre work that makes a detailed investigation into the arms trade and its consequences. Many years in the making, it sees the audience (or I prefer 'user' for reasons which will become clear) given a video-guide in the form of a customised 'tablet on a stick', entering a carefully constructed maze with 15 other users, and encouraged to carry out tasks which follow the narratives of 20 individuals who have some connections with weapons trading. The stories intersect and are reliant on each other - for example, one user carries out an action as part of their story, which has a physical effect on another story. From the uprising in South Sudan to a firing range in Northern Germany to a hacker in the US, this complex tapestry of technology, economics and politics is mapped out through the stories of its agents. Some, as you expect, are very violent, some quite mundane, although all have a haze of menace overhanging them. 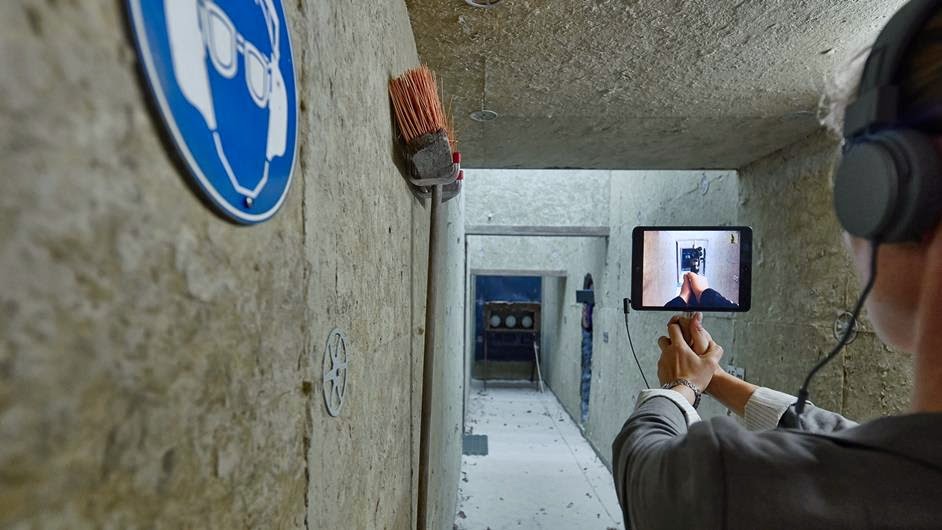 Read more »
Posted by Richard Pettifer at 8:57 AM No comments: