The last days of Vladmir Lenin are kind of secret in-joke. The father of the revolution, he is known (but not exactly proven, because there is no much misinformation and mythology surrounding the event) to have become so sick that his speech became largely delusional, and he had to undergo various bodily transformations that happen when one is sick to this extent. Of course, such mortal conditions are not fitting of a revolutionary leader, around which there is necessarily a massive ideological apparatus legitimising leader and political system equally. Therefore, his last days are somewhat mysterious, as various accounts seek to hint at a reality of a man in decline, whilst not being able - because of protocol - to directly say what happened.

So the actual cause of death and details of his last days are a site of endless speculation for conspiracy theorists, as if they might hold the key to the legitimacy of that which preceded them. Monumentalised in a mausoleum in Moscow's Red Square, his body now stands (or rather, lies) as a paradoxical reminder of the immortality of the idea opposed to the inevitable mortality of its subjects. Though the person himself died, the ideas lived on! Albeit in an, *ahem*, occasionally slightly different form.

Lenin's Last Christmas Party is a fascinating attempt by Latvian philosopher and first-time director Uldis Tīrons to capture the resonance of those last days in the situation of theatre. Based on documentary evidence from the accounts of his nurses, the play abstractly recreates the Christmas occurring roughly one month before his death. Lenin is waited on by his doctor, nurses, and family, who tolerate his incomprehensible ramblings and mischievous jokes. The source material is first-hand accounts from nurses waiting on Lenin, some of whom are also characters in the show.

Tīrons adopts a pastiche style to recount the story, somewhat reminiscent of Robert Wilson with its colour palette,  disconnection of gesture from meaning, white-face, and reliance on a kind of stylised dreamscape. The set (Rūdolfs Baltiņš, Dace Sloka) is a kind of cube or prison on stage, with holes the actors sometimes peer, poke, or speak through. The costumes (Dace Sloka), likewise, are about as far from period as you might imagine, rather offering structural compliments to the gestures of actors. Lines are delivered with a tight, musical inflection, as if to suggest an underlying stress beneath. Discussing the paradoxes of the moment, the doctor (Kaspars Znotiņš) says "The church promises us immortality, then philosophers try to convince us that to live is dying. How can we not give in to fatalism?" 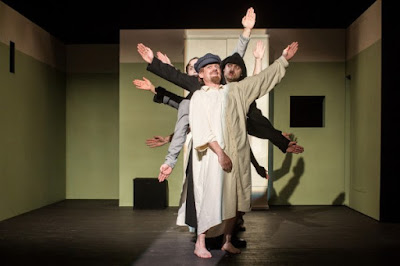 
A blithering, befuddled, trickster Lenin (Vilis Daudziņš, in a much-lauded performance) appears from a cupboard at the back, and from this point on he and his health are the central focus. Undergoing confusing medical treatment, he plays jokes on the over-earnest nurses using a false foot. As the play moves towards the Christmas party itself, things become even more absurd (the announcement of its beginning is translated as "And now, children, let's fucking sing songs and recite poems"). The characters don their animal masks and begin to celebrate in earnest song-and-dance routines performed for the audience in formation (the chorus of one of these is 'Coca Rosa' which is possibly a type of ecstasy). The climax occurs when Lenin takes the mask off one of the actors to reveal... Lenin himself.

Read more »
Posted by Richard Pettifer at 6:57 AM 3 comments: