All the Sex I Ever Had

It's possible that sex and I aren't best mates. I kind of view the subject with some awkwardness, a degree of suspicion, and occasional periods of unbridled enthusiasm. That doesn't make me weird - after all, attitudes and feelings about sex don't just come from within ourselves, but from our environment, and sex appeared in the environment of my childhood years in rural Australia mostly as a weapon in the fight for dominance in schools, sporting arenas, and other competitive situations. Forgive me if I remain more than a little scarred from that.

So to this day I appreciate when someone can give honest information about the topic, because for me just about the only source outside the family was the book Where Did I Come From? (surely a bible of sorts for many kids of rural Australia) which at least explains basic heterosexual biology and potential outcomes when bodies are arranged in certain formations. Another manual was John Marsden's Secret Men's Business, which explains things that are otherwise only referred to in the schoolyard through innuendo or hinted at in certain TV sitcoms. In both cases, what I appreciated was the directness, which, though it seems simple, may actually be difficult or embarrassing to achieve.

All the Sex I Ever Had is 6 seniors sitting at a desk and talking directly to the audience about their sex histories. Beginning at the birth of the eldest (for us in the Espoon kaupunginteatteri in Espoo, Helsinki, it was 1932), the history is chronologically recited as experiences happen. After the eldest, the other 5 slowly enter the picture, often following the first in their (fairly diverse) life experiences. Our actors (selected from the local population, I assume with diversity, excitement, and dramatic weight of their narratives in mind) masturbate, fall in love, break up, marry, and just fuck their way through kitchen tables, hotel rooms, nightclubs, family holidays, and boats. Every 10 years, the readers are interrupted by a dance-break with the cheesiest music that can be found in that period, which also plays gently in the background (as kind of a 'smoother') as they relate their stories. 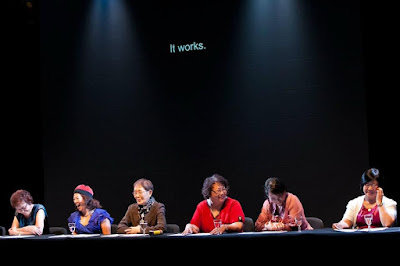 Photo: Singapore Arts Festival performance of All the Sex I Ever Had

From the opening pledge which the audience takes not to reveal any of the information outside the theatre, there's immediately a sense of stripping back a lot of these covers, and attempting to directly address the audience in a type of communication that isn't possible outside the theatre. This creates some interesting moments, and when the mics are given to the audience, and it's our turn to answer the questions (which range from the innocent 'did anyone ever play doctors and nurses' to the more real-world 'did anyone sleep with a married person?').

Read more »
Posted by Richard Pettifer at 6:20 AM 1 comment: