Disclaimer: I just finished a workshop studying under the writer.

Further disclaimer: This appears to be an example of a review where the critic absolutely did not understand even the basic premise of what it was about - apparently a real life occurrence of Chilean children forgetting (or being forced to forget) their parents in the 70s. I choose to publish as-is, as the plot was not as important to me as other things which were going on.

We live in the age of hyper-forgetting. Jameson, Baudrillard - these guys are from 20 years ago now. History is rewritten daily. So not only is there 'no war' going on in Iraq right now, ones that we are absolutely certain did happen are disappearing.

The theatre writer, perhaps, exists on some kind of precipice - balanced between the two acts of forgetting and archiving - their words solidified in print before exploding out of the mouths of actors, and then sitting on a shelf, hopefully awaiting revival. If there is anyone who understands the politics of forgetting, it is the playwright, stranded as they are between these two worlds of preservation and declaration, the library and the public square, as it were.

Mark Ravenhill's new play Show #6, performed by the ensemble of Secret Theatre, seems like a play that forgot even to have a title. Fragmentation of speech - a method that Ravenhill employs in some other plays - is here ramped up to 11, as the characters hang suspended in an inability to articulate.

The meat of the play is a political and philosophical crisis, expressed through the personal in the form of the poetic. Banal reality collapses quickly into fantastic fantasy, and the two become interchangeable. Lines like 'You have to remember accurately or you should stay silent' or 'you can choose a story that makes you happy' and several references to competing realities display a confusion for truth in a mess of political, familial and existential violence. It's a poetic attempt to articulate a crisis that cannot be described with rational speech. 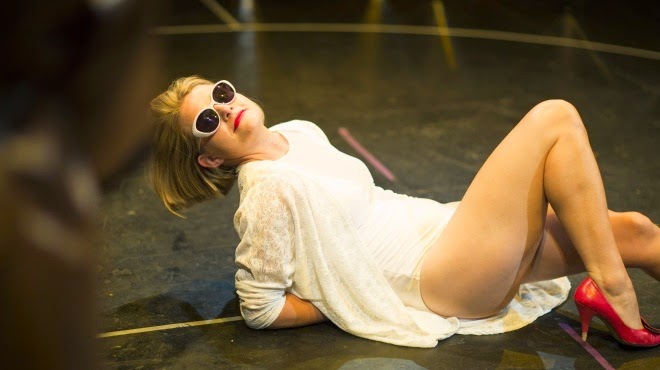 It's disappointing to see the production not meet the demands of the text - though more in the manner of how. The ensemble and director have elected to meet the difficult puzzle of the language with a cold, sharp, almost militant clarity in their decisions. This results in an overcompensation which feels oddly like going to drama school - I could almost imagine an invisible director screaming commands from over the shoulder of each actor.

Read more »
Posted by Richard Pettifer at 6:14 PM No comments: