Historically it was perhaps possible to mix the two (although I struggle to think of examples. But that's maybe because I forget comedy fairly quickly. EDIT - Moliere's The Imaginary Invalid). But now? Apart from following some old adages: "laughing in the face of danger" perhaps, or "tragedy and comedy are two sides of the same coin", I can think of barely any justification for creating an out-and-out comedy about science in the age of global warming. This was very much reinforced for me with Richard Bean's The Heretic a couple of years ago - which at least had the gall to directly suggest that scientists fabricate truth -if not to effectively deal with the problems contained in that suggestion.

That's not at all to say that it shouldn't be done. There are some extremely good comedies out there with serious subjects - the Roberto Benigni film Life is Beautiful is perhaps a perfect example. The risk is that you trivialise the subject. Oscar Wilde, that most trivial comic writer, was the chief exponent, standing as an example of how to treat something as serious and trivial at the same time, creating a kind of acidic layer on otherwise totally irrelevant comedy. Given that scientists already battle vast misconceptions of the public, trivialisation does little to help that situation, and may, in fact, significantly hinder it. 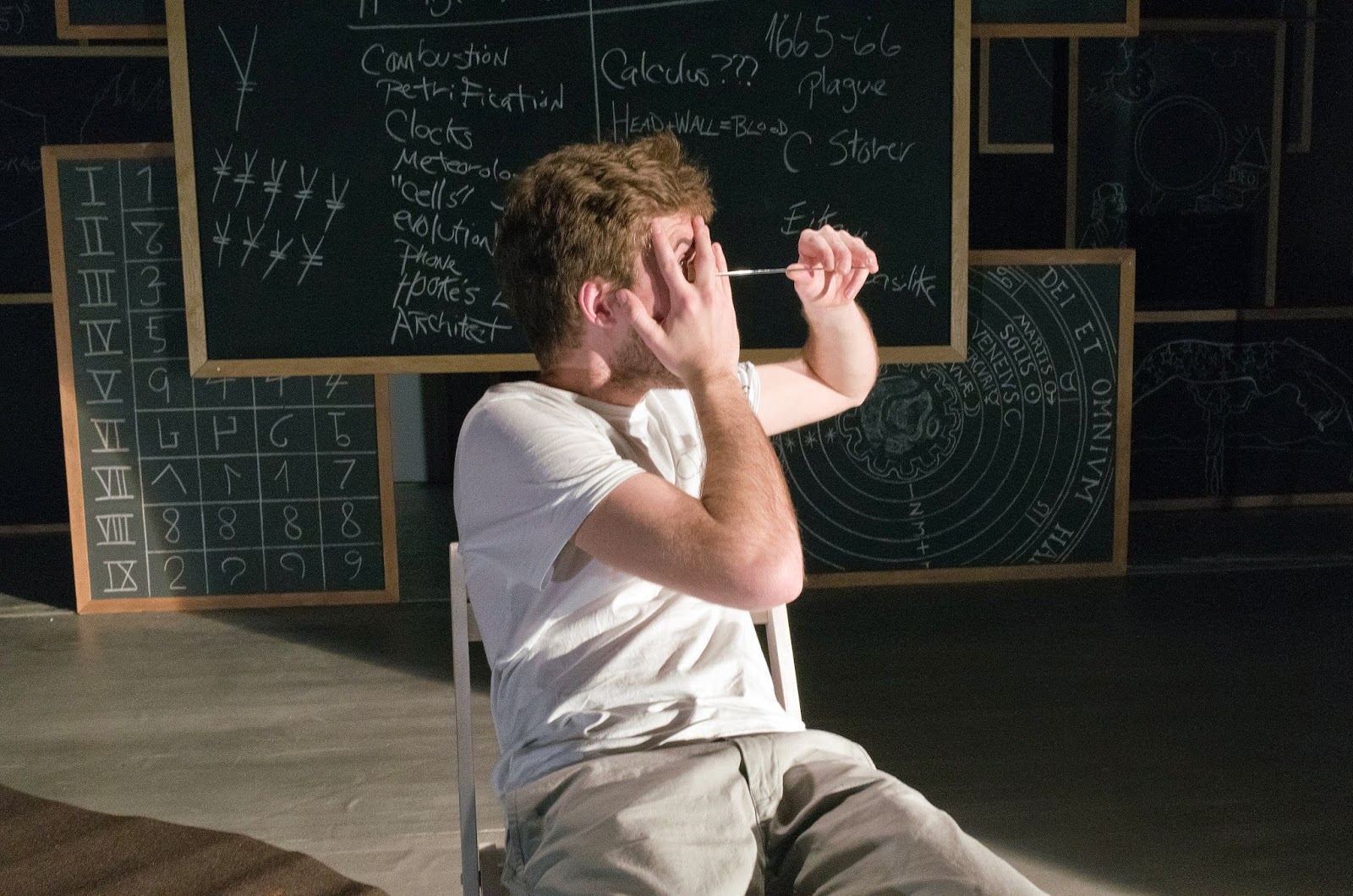 It is interesting, therefore, to see in some supplementary notes for Isaac's Eye, provided by Regine Hengge, (a scientist at the Humboldt Universität Berlin who is acting as a 'scientific co-ordinator' to ETB's ongoing Science and Theatre series),  that the playwright of this 2013 play, Lucas Hnath, "does not miss a single one of any of these cliches". Here she is referring, not necessarily in a critical way, to the myth of the 'scientific genius', sometimes called the 'Great Man theory' which informs the technological determinist view of history - that history is advanced by the discoveries of a handful of select individuals. The accusation of cliche could be extended to many other areas of this play, which I found to be a particularly poorly written - almost inexcusable - attempt to discard most of the context in which it was operating.

I should not be too harsh on the playwright, I suppose. In his defence, all he has done is followed a formula that many playwrights follow, which can be described like this: take a historical figure, focus in on one of the more bizarre biographical details - in this case Isaac Newton's experiment where he sticks a needle in his eye to modify his sight and prove that the light is composed of particles - and create a fictional account of the events surrounding it. No harm done. Right? (Right??)

Given the gravity of the context for which the playwright seems blissfully unaware, I found some of the analogies offensive - as would, I assume, many scientists who are currently struggling to get one extremely simple message across. The depiction of science as something that needs to be dumbed-down so that the average person can understand, for example, is as old as science itself and essentially anti-pedagogical: its message is that 'you can't possibly understand this shit. So why try?'

There may well be truth to this statement, in which case the broader ramifications are probably dire (and it does somewhat seem to defeat the purpose of ETB's Science and Theatre series). But it is not one that ever needs to be made. If I am 'never' going to understand something - I certainly don't need to be told that. If it's important enough, you should try and teach me. If not, why bother mentioning it?

But, I hear you cry, this is COMEDY. And not only comedy - a particular type of comedy designed precisely to alleviate the fear of what we don't understand. Yasmina Reza does this perfectly well. Get in there with a positive attitude, kick the ball around, go home without any bad consequences and hopefully something stuck which can be referred to as 'drama'. This paranoia - to say something which might be perceived as critical - even exists in the dialogue of Isaac's Eye:

Relying on home truths (in this case something like 'If you don't have anything nice to say, don't say anything at all') to deal with the anxiety of not comprehending something is pretty problematic in the context of science. But still, there's room in this admittedly narrow scope to create great theatre. Isn't there?

Well, not really - because after this point, everything that is done well, is, in fact, serving an end that is so utterly flawed. In certain contexts I could buy the approach - for example, if the payoff is an intuitive information otherwise incommunicable such as in The Importance of Being Earnest or perhaps Moliere's Tartuffe,  which employ this bourgeois structure in order to critique it, or, at a stretch, Reza's God of Carnage (in as much as that play can be read as critique). With science, right now, that's always going to be a massive ask. The stakes are very high.

It doesn't help the anti-pedagogical outcome of the play that it is built like a classroom history lesson, heightened by the presence of multiple blackboards in the stage design (Tomás Fitzpatrick), and the playwright's patronising cheat to separate truth from fiction by means of writing on said blackboards (surely you can suggest this in the actual writing? Are audiences that stupid?) as well as other strange devices, (for reasons which should be clear, I'm hesitant to call them Brechtian) such as declaring act and scene number at the top of the scene, the presence of a narrator (played with as much charm as possible by ETB regular Jeffrey Mittleman) who basically spells out any subtext which may exist... the list seems to go on, and blights any worthy attempts by all concerned with this production to inject life and energy. It's just lazy writing, that assumes its audience is as lazy as the writer.

These attempts include a worthy turn from a clearly astute comedy practitioner Ben Maddox, an enthusiastic, camp portrait of a young Isaac Newton from Oskar Brown, and a well-managed contribution from Mary Kelly, who is burdened with a poorly written character in a male-written play about great men, and even has an extremely problematic feminist bullet to dodge. It's a nicely balanced, responsive ensemble. But this is very much a case of doing the best with what you've got.

Returning to Regine Hengge's notes, what perhaps should have been the focus of this play is neatly summed up in this interesting observation: "Neurologists have discovered that the dopamine system in our brains is a reward system originally evolved to make us addicted to learning" (On being a Scientist). Hengge is suggesting here something pedagogical about the human capacity for addiction, commonly twisted towards other ends (drugs, gambling, consumerism, etc). It's an observation that can be extended politically, relevant to many facets of life, and one that immediately calls into question whether the play is doing exactly this - if its aspirations are not pedagogical (and I welcome the argument that they are  - to me they certainly weren't) - then what are they? Commercial? Ideological?

Take your pick. Within the context of ETB's Science and Theatre series, Isaac's Eye makes sense, if only as an anti-pedagogical provocation.

Note: A discussion about Isaac's Eye will be held after the performance on April 30th, and a pre-performance lecture on 17th Century Experiments, and What We Can Learn From Them by Prof. Friedrich Steinle (Technische Universität Berlin) on May 7th, 7pm.
Posted by Richard Pettifer at 8:19 AM