My day #1 (the festival's day #7) of this whirlwind schedule saw me out in the far east of London, visiting the newly-minted Applecart Arts for the first time.

The theatre has an interesting recent history. This year, the former Stratford community centre transformed from its roots as a Methodist Church, opening with a new lease and an arts-focused agenda. It’s not an uncommon story for London – a former church turned community centre, no longer profitable due to its surge of Olympics money coming to an end, then goes to tender to try and find a new buyer. Inevitably, property developers swoop, and the church must choose between profit and community.

This time, they chose the latter. Applecart theatre is the result – a hybrid of community centre and theatre, housing many of the former non-profit activities and housing a loosely curated program of festivals, events, and one-off shows.

Voila!, I’m reliably told, is its first major event hosting – and it’s a great way to plant seeds, both for the  future of UK-European collaboration. The venue has seen several performances as part of the festival, including a British collaboration about Goethe, and last night, two monologues from women about immigrating to the UK – Expat Underground (UK/ITA) and Rootlost (POL/UK). I’ll focus on the former, although Rootlost, professionally performed by nomadic world citizen Magdelana Krohn, contains some interesting crossovers with its preceding show.

Unless you happen to be not human, it’s hard not to love Expat Underground. Developed in the wake of the UK’s referendum on European Union membership, the show is an autobiographical retelling of performer Cecilia Gragnani’s 9-year emigration to London. Beginning with naivety, the show traipses through the struggles and disappointment of menial jobs, to her romantic encounter with a British man and feeling like a foreigner in her own country. All the time, London speaks to her – literally, in golden BBC voiceover by Steve Wickenden – explaining to her the hidden rules and regulations of being a Londoner. 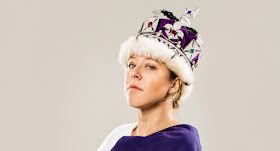 Image Credit: unknown
It’s admittedly a somewhat cliché premise, that could be the beginning of any number of shows on the subject. But Gragnani’s charismatic personality, expert management, and openness as a performer, as well as some great writing by herself and compatriot Jvan Sica, more than overcome any lack in originality in the premise. The dramaturgy and direction from Katharina Reinthaller arrange her personal account into chapters that weave together beautifully – from the opening interrogation by a imaginary Border Agency officer (“but what if we got married? What do you mean, it’s too late?”) through to Cecilia’s personal experiences, to the finale which contextualises the struggle within a political situation shared by countless others currently in the UK.


Of interest to me here is the particular way Gragnani negotiates the dominant system of social relations. As an Italian originally, she is characteristically optimistic and social, her misunderstandings arising from the bittersweet articulations of her neighbours (who say a Wildean ‘lovely’, when they in fact mean quite something else) and who stare at the ground as they walk past (reminiscent of another Italian actress expressing to me her amusing distaste of German social relations – “They don’t look at each other! They fuck with the app!”). Her own performance is tinged with a British politeness, with criticisms introduced carefully, and the performance itself obedient of the best British theatrical traditions of farce, as though pulled from the boards of Cambridge Improv Club. This form makes it a useful vessel for exploring these issues – but it’s not without its limitations. Gragnani’s story is one of despair and struggle told by lovers of London, but with a probable (I imagine) happy ending of some sort – for countless others, the situation is much more bitter, and much more angry.

“There’s an army of us” says Gragnani at the piece’s end. And that is indeed my understanding. The personal circumstances of recent immigrants to the UK from Europe need to be heard, and their rights need to be listened to in the process of leaving the EU. The New Europeans I have written about previously – mobile, multi-lingual, and often extremely talented (by, the way, Expat Underground is also performed in Italian) – must be acknowledged as human beings with rights to share in mutual prosperity, a direct benefit of the UK’s participation in the EU for over 40 years.

Far from a generalisation suggested by its premise, Expat Underground is a particular show trying to say a particular thing, to a particular set of people, at a specific time. Sure, part of me wishes it had come before the EU referendum. Nevertheless, there are still stakes here, notably livelihoods, as Gragnani points out, and her chief complaint – which I think could be usefully summarised as “I came here with an understanding, and you have changed the agreement”, holds true under any interpretation of fairness that is not outright xenophobic.

It’s a show that puts a human face on the consequences of Brexit, and needs to tour beyond its upcoming appointment at London’s Tristan Bates theatre, and into Sunderland, Birmingham, the West Midlands, Yorkshire, Wales, and others. It’s a charming appeal to basic human decency that needs to be heard at this time, and a resounding acknowledgement of Voila Festival’s decision to expand beyond French language.

And within this giant, dominant superstructure of social relations, politics and economics, what will become of piccola Cecilia?

UK, lovers of reality TV: it’s for you to decide, and decide well. We are in the real world now. We want our lives back.