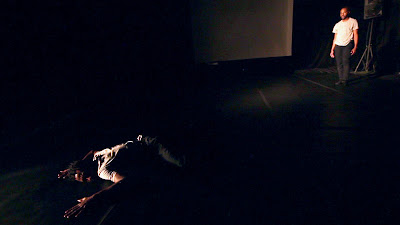 The next ‘act’ is preceded by a floodlight, marking a kind of threat or perhaps superhero aesthetic. An excerpt from UK rap artist Akala's The Ruins of Empires comes on, and the figures engage in an elongated and complex conflict, mixing co-dependence with vulnerability, only to snap back into wrestling. From this point, supported by the lyrics of Akala into a point of universality of time and space, the deconstruction of patriarchal power reveals its contradictions as it swims toward its conclusion.

It’s a contemplative and subtle work that drops slowly and unfolds on its audience. Its deconstruction of patriarchy sits alongside its deconstruction of blackness, but it avoids (or rejects) easy answers and categorisations. The result is unspectacular, but filled with a kind of integrity that nuances depictions of masculinity and blackness, exactly as claimed by the artist.

Born Into Ruins is the beginning of something special from an emerging choreographer. The choice of deconstruction as a mode of critique serves the dance well, as does its rejection of easy options for the artist. The week’s development points to multiple possible futures, and was a well-received addition to Faki that delivered something complete and left a significant mark.

Performance artist Nasheeka Nedsreal enters the stage from behind us and immediately begins to give the kind of backhanded compliments that are well-known as invisible (or not so invisible) racist slurs, only this time the target is reversed. “Can I touch your hair? Where are you really from? Oh you look pretty, for a white person. Are you a dancer? Or is it just in your blood” and so on. Upon reaching the stage, she turns to us, all menacing black hoodie and gym shorts, and proclaims a crystalline  phrase, subsequently repeated:

What role do I have to portray to be visible in your dystopian reality? Because I’ve tried on this mask, and that mask, and it’s despicable. I don’t know how I’ve still got my sanity!

From there, the dramaturgy follows a relatively simple pattern, with subtle variations. Nedsreal occupies four corners of the room and four different stereotypes, repeating the mantra. One is an animal, one is a stripper (proclaiming “am I your fetish?”), one is extremely angry, and one reminds me of a pop-culture version of black femininity exclaiming words like ‘boo’. Moving between these modes, she states different passages of text – a story of racism that happened the day before when an unnamed colleague entered the space during rehearsal and beguilingly asked her out of nowhere if she was from Africa, a lengthy diatribe about white people taking up “too much space”, a question that “what are you without racism?” and so on. It’s valuable text, much of it original, and each blow seems to stick in the brain just long enough to build into a shattering cumulative effect. 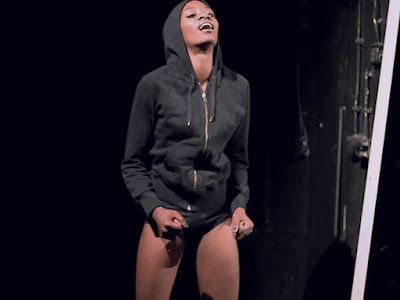 At some stage, but to be honest I am not sure when (at this point in both performances that I viewed my head is spinning), Nedsreal labouriously pushes the platform off-centre. After an interesting contemplative moment with her own reflection, acting as a kind of aftershock to the previous barrage, she climbs the platform to deliver the finale, an abbreviated version of Maya Angelou’s Still I Rise.

It’s a big, fat ‘fuck you’ to whiteness, directly addressing the structure via personal accusation. Nedsreal maintains a massive stage presence throughout, rarely transforming in any genuine way from full assault mode. It’s impressive and powerful to witness: an excellent performer riding the dragon and harnessing the full arsenal of revolutionary anger. It's at once an address to whiteness both in a personal and structural sense, as well as an unapologetic celebration of black power through self-expression, for which whiteness may as well have never existed.

A brief side comment: unfortunately, any amount of theorising and policy-making does little to prevent first-world corporate profiteering, exploitation, and military invasion and displacement of non-white and indigenous populations, making performances like this one all the more important as tools to address it. Although uncomfortable for some audience members, they highlight the fact that these structures punish the individuals and communities who biologically can never conform to that system. Performances like this are necessarily personal. More than this, they point with desperation to its dystopic and hateful foundation - built out of the governance of those who would serve it with greed and thirst for power. More again - when they are really good, as I feel this is, the performer is able to rise up and meet that dehumanisation with the blistering full power of their humanity - a sight that is simply awesome to witness.

I will stop my enthusiasm short of proclaiming that the artist is speaking for everyone here, as this is suggestive that the punishment under the global white system is equally distributed and the rewards equally dished out, which it absolutely is not, and nor is that the obvious intention of the performance. But I will say it’s in everyone’s interest to listen well to Obscure Noir, and to really consider what it is saying, beyond any personal discomfort.

Nedsreal's refusal in the performance's ending rejects the option of those considering an emotional escape-hatch via feeling sorry for her, leaving the audience fully culpable, and implicated in the dystopia she has - temporarily perhaps - risen above.

Image credit: Josip Viskovic
Posted by Richard Pettifer at 2:59 AM