So said someone with intimate knowledge of COPs. A Messe is a 'trade fair' in German, and I didn't take the comment to be complimentary, as the full sentence translates to a rather acidic 'it's like a trade fair'. Said with a shrug, as it was, it amounts to about as complete a dismissal of the credentials of the COP as you could possibly imagine.

My island home Australia seems to intimately understand the link between money and environment. The Minister for Environment these days is Josh Frydenburg, the former Assistant Treasurer and former Deutsche Bank employee. Australia’s leader of the delegation to the Fiji/Bonn COP is Patrick Suckling, whose background includes serving as High Commissioner to New Delhi and extensive work in the Department of Foreign Affairs. Both are politicians with a background in international politics and trade (and not, say, science). So there’s not really any doubt about what Australia is there to do, and it’s not about preserving nature, it’s how to turn environmental crisis into opportunities. It’s a position Germany seems to share, where grave and ernst (serious) rhetoric is seldom met with actual political sacrifice. Rather, the energiewende (energy revolution) is sold domestically as a way to sell more product, create new industries and extend humanity’s harnessing of nature. 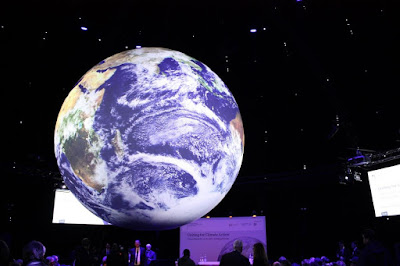 At best, COPs can be what they pretend to be – places for coming together and negotiating outcomes for protecting the environment. At worst, they exacerbate the commodification of the environment, facilitating the sectioning-off of resources prior to their inevitable exploitation. Sometimes, these things happen in the same gesture. When the world is watching, as they were in Paris, political leaders might just create some rolled-up sleeves theatre to show that they mean ‘business’. The reality is that it’s more likely that they really, *actually mean business*, as can be demonstrated when the world is not watching.

Occurring at a critical point in negotiations, where the 2015 Paris Agreement is to be solidified into a Book of Rules to which countries will have to adhere, this COP seems remarkable precisely for its lack of remarkability. The changes in Bonn from its pre-COP state were slight – life carried on, apart from a sudden proliferation of suits and the pale blue lanyards. You might say, it’s not unlike any other trade fair.

With the global media salivating at the US President’s untimely Asia visit, this COP seems to have little media presence. Far from Paris, the major media organisations have simply not sent journalists*, and are reliant on agency articles. This amplifies the feeling of mundanity present at the COP, all-too-reminiscent of the catastrophic ‘business-as-usual’ scenarios for which scientists reserve their highest vocal pitch.

Certainly, the setting of Bonn lends itself to social control. Largely populated by middle-class and students, it’s a kind of elite fantasy Germany that belies the gritty labour and hardship of other parts of the country. It’s the perfect location to manage and deliver a tightly controlled narrative. The division of the COP into ‘official’ and ‘side-event’ areas (‘Bula’ and ‘Bonn’ Zones, the former being a greeting in Fijian language), which I’m told is unprecedented, further compounds the sharply focused nature of the event. No longer pretending to be for people, the COP has retreated into the boardrooms of the developed world, leaving little to the imagination and little possibility for change.

The sickness of the COP is symbolised by its grand technological masterpiece – one of the only official public areas of the COP (with the Bula and Bonn zones only accessible to those with accreditation). Shrouded by a giant inflatable planet earth, the areas around the Climate Planet are a weird manifestation of ideology, showcasing German forays into development, aid, philanthropy and health - expanding the country's green global image (particularly in Africa) even as it sticks relentlessly to coal power at home. The centrepiece giant inflatable planet earth, developed by New York-based Global Citizen, plans to tour 24 countries (presumably without the surrounding paraphernalia) and features nightly screenings of what is simply called Film für Alle (Film for All, author unknown). This blur of science and technology is a kind of ‘neo-documentary’ which plummets its transfixed and paralysed audience through dystopian environments, across historical periods and across bamboozling scientific models. Its transfixed audience leans back and stares upwards at the unfolding catastrophe, bathed in the blue light of the Climate Planet enveloping them. It’s like a green totalitarian’s wet dream. I felt like Alex from Kubrick's A Clockwork Orange, forced to drink in all of the propaganda of the environmental movement’s technological determinist arm. I lasted about 20 miniutes of the digitally manipulated landscapes before stumbling from the giant spectacle, eyes burning from hypercolour modifications of molten lava.

The Climate Planet is a perfect representation of the erasure of human beings from the COP. Things which might otherwise have been human are suddenly rendered artificial in a space that feels more like a futuristic Disneyworld than a site of public engagement. This should have left a role for the alternative "People's Summit" within such a controlled environment, and indeed this was the only place where actual information seemed publicly available. A self-organised side event, funded by German philanthropic organisations and featuring many NGOs, the People's Summit made use of  sites around Bonn such as universities and colleges, and interlinked with major protests held on the 4th and 11th of November (about the beginning and middle of the COP). Many attending the people's summit were also heavily involved in other activism, such as the quasi-successful Ende Gelände action on the 5th, attended by the highly publicised Pacific Climate Warriors, in which Europe's biggest coal mine 20km away was temporarily blockaded. To me, these moments represented a reality of the COP that was more human, and, not coincidentally, they seemed the only time when  Fiji’s presidency of the COP did not seem certain to be totally washed away – as the inclusive events focused on indigenous narratives, the Pacific Island region, and global voices.**

On the 4th day of the COP, esteemed collaborator Sonja Hornung and I made our own alternative, leaping into the Rhine in protest at the lack of humanity present at the COP. Symptomatically, the turnout for this wasn’t large, presumably people were deterred by the subliminal messages in nearby Climate Planet. Nevertheless, the statement was made – negotiations will never occur without people. If you try to block us out, we will find a way to intervene, or simply to evade.

All of which, does not bode well for this COP getting any kind of outcome which helps anyone - except precisely those who it is designed to help.


*Admittedly, they have not sent journalists yet. Most reporting will be done on the outcomes of negotiations which will come at the end of the COP, not on the nuts and bolts. Nevertheless, with the Marrakesh COP of 2016 all but disappearing from the global media in favour of the US Election, there is a pattern emerging.
** It should be noted that there are several sites of resistance against this invisibility, some of which are available here. The entire subject of Fiji presiding over a COP hosted by Germany are worth exploring, and I will save this for later.

Thanks to Sonja Hornung for her contributions.

Posted by Richard Pettifer at 9:41 AM