COP 23, and the Myth of Choice


Well, that was quite a time.

The COP 23 negotiations have carried on, as I suppose they will. After some initial wrangling over the agenda, in which Germany was called in to stop Turkey from intervening and delaying the negotiations, things have been proceeding 'smoothly'. Who knows what this actually means? Smooth - as in, the negotiations are doing what we want them to do? Or alternatively, that there has been no opposition?

My experience of the COP has been limited by schedule, as we're ostensibly here to work on a project with the Umweltbundesamt, or German Environment Agency. The work involves collaboration with refugees living locally, on a performance that is presented alongside a forum about Climate Migration.

To say this work has been difficult for esteemed collaborator Sonja Hornung and I is highly understating that point.  Entering the fray of refugee politics, where the smell of blood permeates what should be matters of simple humanitarian organisation, with a group of vulnerable people is an extremely difficult thing to try and do. Compounding that, is our limited experience working with vulnerable people, and the fact that this particular collaboration is with German government - who are not always the most sensitive to either art or vulnerability. Furthermore, there's the context of this COP, itself seemingly favouring the pre-existing structures and not, say, agitating for change. All of which makes the stakes for that project high, and the pressure reasonable immense. 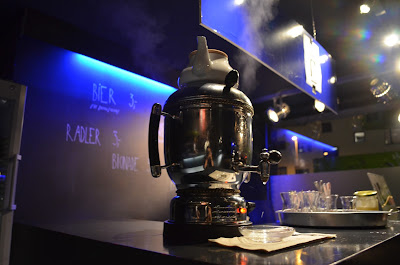 We were aided by a group of collaborators who proved to be tremendous. I have long maintained that the resilience and openness of many of or seeking refugee status is precisely the kind of spirit that I want to coexist alongside. The experience of fleeing conflict is one that Europe believes it knows well - and yet circumstances today are quite different to 70 or even 25  (in the case of the Bosnia-Serbia conflict) years ago, as is the geography. Whereas 25 years ago, 438,000 refugees entering Germany from Bosnia, Croatia, Albania, Serbia and Kosovo seemed like a logical conclusion, in 2015 a media hysteria ensued.


Working with amateurs requires a specific set of skills, as, I suppose, does working with government. In both cases, what is not professionally known becomes the site upon which humanity is negotiated – and so, where roadblocks were encountered, we fell back on the fact that we were people trying to work together. Nevertheless, performativity perhaps comes naturally to someone attempting to immigrate in difficult circumstances, as one encounters all kinds of situations in which the self is skewered in multiple directions at once. So clowning, for example, makes intuitive sense to someone used to being stared at, and someone accustomed to circumventing impossible situations through the use of a very small, very red mask.

Our work centred on a trio of themes: Journey, Care, and Status. The first was selected because it applies to both the situation of migration - which always involves a journey - and the theatre likewise. Making this parallel is not without its problems, as the theatre is a site of symbolic representation, whereas for many in the group, I believe the journey is alive in memory. It was clear that the ‘journey’ on stage can be anything, both for audience and performer – a finger traveling from one location to another, a gaze circling around a room, or a literal walk in a space. For the audience, likewise, any journey that is worthwhile will have some resistance, as well as a customary beginning, middle and end.

The subject of ‘Care’ was one we approached both as a necessity to creating a working space that did not damage people, and as a thematic device that is shared with the audience. Lullabies were employed for this – which are not, apparently, universal, but nevertheless shared in some form by many cultures. It seems putting children to sleep is a function of art required in many contexts. Many other theorists and writers are exploring the subject of radical care more thoroughly, and I won’t go in to further detail here – suffice to say that creating a rehearsal room ‘of care’ – of the space, the self and the other -  is something that demands a significant amount of labour, in many ways more important, but in some ways easily transitioned into by the western theatre, which has been practicing these concepts (with mixed success and occasional exploitation) since at least the Ancient Greeks.
Finally, ‘Status’, existing as a marker of hierarchy between human beings, was – carefully – approached as a necessary reality within the context. The exploration of status within human relations is always painful, but it defines so much of how people function, as well as rendering visible the forces of patriarchy, race, and other hegemony which defines power relations between human beings. Opening up a site of negotiation was always going to be difficult, but necessary, as so much of the human experience of migration – let alone the climate change negotiations – are defined by status. The generosity of the group led to some amazing encounters here.

So it was that, after making our final preparations and learning how to receive a curtain call, we took up our positions in the foyer and theatre space of the Theater Bonn Werkstattbühne (Workshop Stage, a small studio space) and awaited the audience.

The processing of people is a key time in which people encounter the enormity of the government. As people were ‘processed’ through the protected area, they were invited to navigate all sorts of psychological minefields – with their compliance based on a certain set of rules silently governing our behaviour. Furthermore, immigrating often involves encountering a foreign set of rules and behaviours, which can be frustrating and belittling. In the situation that is defined by climate change, literally an infinite number of people may be displaced - internally or externally – meaning that there is much learning to be done, as being both high and low status.

By the time they reached me, occupying my old job as Front of House attendant inside the theatre space itself, the audience members were inevitably in a hostile mood. No-one likes being told they are not in control of a situation. Unfortunately, this is exactly the context that climate change throws up – one in which people are forced, to emigrate, to adapt, and to survive, even as western democracies continue to present us with the myth of choice and free will.

The ensuing dialogue between ‘experts’ from the COP and beyond barely touched these issues, preferring to safely categorise climate change as something to be experienced by people in other countries, towards whom Germany should be benevolent and charitable. This is not untrue, and Germany does not qualify as a vulnerable state. Nevertheless, no-one is impervious to global shifts, as can be seen by local examples of displacement due to mining, or coastal erosion in the North Sea. Insurance markets – big business in Germany – are playing dangerous games with their products, and trading under circumstances that seem certain only in their instability.

Who knows what the future holds? But we will be more and more reliant on this common humanity, and not our professionalism, to come through it. 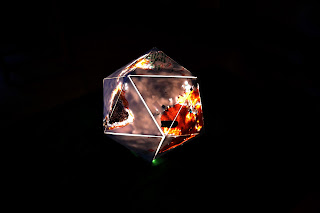 Posted by Richard Pettifer at 6:16 AM