Disclaimer first: This will be the idiot’s review, as I am not familiar enough with Euripides' play The Bacchae, its various re-stagings, or even Classical Greek Theatre.

The Bacchanals is certainly deserving of a more informed critic. Adopting the metatheatrical frame of actors preparing before a performance, the play tells the story of the power dynamics behind the all-female chorus of 6, as they strategise, form alliances, and plot against one another. The central figure of Dionysus – omnipresent and yet invisible – presents both an object of their anger and their chief tormentor. What follows is a kind of classical tragedy re-set in the dressing rooms of the British theatre, as the women jostle, ally, and attack their way through various formations of human struggle.

It’s a faultless premise that renders the politics of the original play accessible for a new audience, while casting informed and refreshing comment on the play itself. Watching the actors back-stab and bitch their way around the all-white Ikea set which forms the casual environment of the dressing room – intensely private, almost sacred – is as deeply interesting as it is pleasurable. Their machinations are only interrupted by bursts of seamlessly-inserted direct quotations from Euripides’ The Bacchae, which itself brings a certain dream-like violence. It’s a play that’s not afraid to be trashy as hell, and the effect is a kind of Real Housewives of Camden, only with a higher potency, and probably less men. 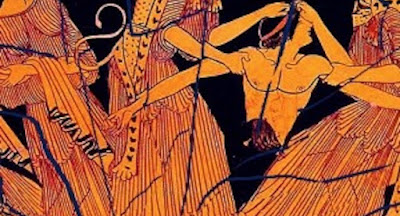 The feminist interpretation of Euripides text is clear from the beginning, as the piece opens with an erotically-charged choreographed tableau (movement choreography by Christina Kapadocha) – a kind of ritualistic manoeuvre that nods to the play’s Ancient Greek origins. But as successful at these choreographed moments are, there’s also an interesting side-effect that reverberates long after the choreography is over: I don’t think I’ve ever seen such precise ‘chorus work’, if you can call the work of the ensemble that, on the stage before. This ensemble are simply, for whatever reason, extremely connected. Coupled with the sure direction of Phoebe Ladenburg it makes for some sublime instants, as actors place themselves in a seemingly casual and everyday manner – tying shoes, adjusting make-up – only to pause in something resembling Raphael's School of Athens. A movement on one side of the stage finds its reverberation on the other, as though it's all part of some giant web. It really is exquisite stagecraft, pulled off by a completely in-sync chorus - with Ladenburg perhaps enjoying the liberation of the tiny stage of the Etcetera.

The legitimacy of the feminist argument is unquestionable, without being forced. It’s by no means the first interpretation of The Bacchae to offer a feminist reading (Carol Churchill and David Lan in the 80’s, for example), but I can’t imagine a more successful one. The characters ruminate over the democratic nature of sharing lines (“Did you learn my lines as well?”), lament on the lack of female roles handed down to them by the Ancient Greeks (“I’ll support anything that gives me more roles”), and throw in – again surprisingly effortless – contemporary references (after making a conservative argument against adapting from the past traditions of the Ancient Greeks rather than recreating them, an actor is met with “I bet you voted Leave”). The piece delves into hopeless comedy, a phone call to an ex-lover beginning in strength, and descending into a desperate scream of “I LOVE YOU!!” transitions smoothly into a violent and revolutionary contemplation of tearing Dionysus limb from limb (one asking “Do you think we could?”, the other “Do you think we couldn’t?”).

Eventually, they do. The almighty Dionysus, an insipid parody of patriarchy, thrusts his way onto the stage proudly. But by this time, we know what’s coming. And even the most stout boys club puppet-master would have to take a share in the satisfaction of the masculine, ideal god shown to be mere mortal against the performative strength of these women, as they symbolically revolt against the structure, first by robbing him of his lines, before devouring him on our behalf.

It’s a cathartic end, but it’s not the whole. And The Bacchanals remains impressive not only for its targeted attack on patriarchy, particularly within theatre, but its delicate and nuanced examination of women. It’s a timely piece in this regard, tapping into the conversations around representation both on and off the stage, as well as relationships between women, achieved by going back to the root of the problem in the origins of Western Theatre. I doubt there are other contemporary interpretations that would be as successful, or as cogent.

The Bacchanals closes tomorrow, but hopefully not permanently. See it.