Going to Vierte Welt (which means '4th World' in German) is really like stepping into another dimension - it's a place where theatre absolutely should not exist. For one, there are these 4 giant pillars in the centre of the room, presumably needed to support the goliathic apartment building in which the theatre is housed, and guaranteed to block the sightlines of even the most flexible giraffe. The room has the feeling of an office-block, with major light and sound bleed coming from the raucous, inescapable Kotbusser Tor outside.

It's not a coincidence that I've never seen anything to really blow me away in Vierte Welt. It's that kind of space, too connected with reality to offer the transformative, escapist experience people (myself included) have come to expect from theatre in the West, based in the illusions offered by the Ancient Greeks.

The design of Notaufnahme - Hospitali (primavera*maas) does just about as good a job as any show I've seen at dealing thoroughly with the space. The action - centred around a Berlin artist from Tanzania with mental illness - is supplemented by pre-recorded screens which approximate the action (rather like looking at a poorly lip-synced animation, but very effective). We follow the central character through his struggles with the German medical system, as in a maze of bureaucracy - mirrored by the scrawled wallpaper depicting a city skyline - and a fragmented, confused story emerges of the difficulties in addressing mental illness.

This is a research-based project that attempts to communicate something very large - the imbalances in medical treatment between people, particularly between Tanzania and Germany (where Christoph M. Gosepath, co-director with Robert Schmidt, has previously taught on the subject). It's not entirely unsuccessful with that, despite the gravity of the project. Stellar performances from all cast help this objective, perhaps led by the bullish Lisa Marie Janke but perfectly in balance with a quieter, more concrete performance from health expert Bornice Biomndo and the careful portrait from  protagonist Nkwabi Nghangasamala.

As you might expect from a piece developed by experrts on the subject, Notaufnahme - Hospitali doesn't trade in cliche of mental illness that might be found in other texts. Instead, Club Tipping Point deliver an informed criticism of imbalances in medical treatment for mental illness, including processes of interrogation ("Keine Aussage ist auch eine Aussage"), imbalances as a hangover from colonisation of Africa, and the objectives of health companies operating there.

The size of the ideas means that Notaufnahme - Hospitali will never be error-free, but it's worth seeing just for the scale of ambition, and there is no doubt plenty of work to come in the same field of research. Testimony to the realisation of the project's educational function is the Q&A, where Gosepath steps onto the stage to answer questions from the audience. Apparently, we wanted to know what is the difference between someone who is mentally ill and someone who is not (apparently it's never clear, but for example, not being able to distinguish the self from the environment) and something about the feeling of having one's thoughts stolen from them. Such interesting insights are a hallmark of the material of the show, benefiting from a type of interdisciplinary learning between theatre and science. 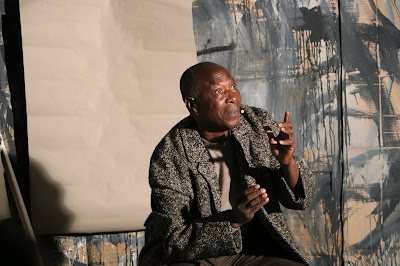 Posted by Richard Pettifer at 3:17 AM