It's Day 5, and by now the festival is starting to drag its way towards the inevitable finish line. The delegates of the Baltic Forum have settled into their daily routines, and we go to the theatre with a very 'once more unto the breach, dear friends' sort of attitude. Not that it's a chore, exactly, just that watching show after show is kind of exhausting. Being in a theatre audience is also a labour - and nothing makes you more conscious of this than watching 4-5 hours of theatre each day. That's a third of waking hours.

Tomorrow is Conference Day, in which delegates will present papers to each other and engage in critical discussion. So, your correspondent will limit himself (really this time) to a few comments about the two shows he caught today. One of these, The Swallows of Fatherland, was a biting satire with its false teeth removed, and the other To Touch the Moon, a blending of drama and choreography that felt like a soap opera on stage - some severely restricted comments on the latter below.

The Swallows of Fatherland

Oh, the pains of the 'country town'. All who grew up in rural areas know it well - the gossip, the xenophobia, the horrible, horrible restrictions placed on each other. The painful consensus, tragically miscalculated at times, painfully real at others, sometimes simply naively brilliant. It's a rich source of satire, not only because it is so laughable to an elitist, cultured, urban perspective to which theatre normally panders, but because it shows the perspective of the accusers for what it really is - not necessarily more or less legitimate.

The Swallows of Fatherland has a perfect satirical premise (although it's referred to as farce in the publicity material) - the drama club of a rural Estonian town stage a play about the War of Independence, to celebrate the 100 year anniversary. There's just one 'problem': they're all women! (Cue laughter). Some colleagues stayed away based on this premise, but I bravely soldiered on, and as I stepped into the rural-town-hall surrounds of Tartu's Student Club, I expected a connection to the most cringe-worthy aspects of my rural Australian upbringing. 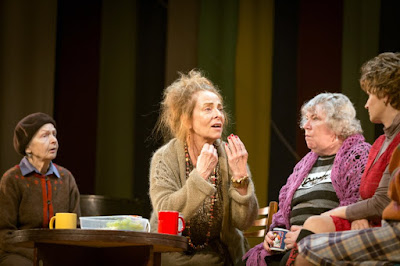 In this sense, I was not disappointed. The play, written by Estonian favourite Andrus Kivirähk, is a sharp observation of Estonian small-town life. Starting with a few miserable, plonky, piano chords, aged member of the Northern Lights Drama club, Anu (devilish Ester Pajusoo), wanders onto stage, sitting down to knit. In comes Merike (Marta Laan), in a fit of rage, and launches into a detailed diatribe about how the toilet is broken again, and when will it be truly fixed, and if that bloody mayor would only do his job rather than lining his pockets in Greece etc. All lines of argument which are painfully familiar. As Sveta (Maria Klenskaja) enters, the discussion turns to the correct or incorrect attire for saunas (which Estonians are quite interested in, I'm told), and who is the correct sort of actor to play the lead in Madam Butterfly. The scene is set for the group's writer/director Pilvi (Ülle Kaljuste) to enter and proclaim that she has written their new play about the war of independence, and they won't be able to play in it - to much protests ("I could play a young man! I've even played a rabbit, and they're much smaller"). It becomes a game of trying to get the village men to participate, and when Toivo (Taavi Teplenkov) finally comes to fix the toilet, he's the first victim to this desperate circle of biddies.

The play carries on from their as you might expect, with various hi-jinks as the ladies try to motivate their men to participate, met with the disappointing realisation that their men are all drunks, complainers, or simply unwilling to speak. It's observations, from both writer and actors, are both cruel and loving, as good satire should be. Merikese explains her constant surprise at her husband, "why is this strange old man living in my apartment with me?", while Sveta gives an account of her experience dating men in the small town: "even in the cinema they're prattling on, always have to show how clever they are" followed up by the amusing "I don't need a man-shaped radio". At its best, the writer takes permission to make such observations, which (surely) cut to the essence of Estonian rural life. There's a familiar sense of futility hanging in the air, shops are closing, people want to move to Finland where there is more money. In these moments the writer holds up a mirror to the (mostly urban I suppose) audience, and to himself, and says: this is the unseen effects. The most biting line, in this way, is "When did the post office close?" to which the response is "10 years ago. I remember, because it was when Tallinn was Capital of Culture". It's the kind of line that points the finger directly, and makes a connection that may not be previously obvious.

Some of the observations are less astute. One example is this line: "nowadays, people only have respect for blacks and gay people". Here, the writer encounters a particular type of conundrum of truth verses representation. I can vouch that, if Estonian rural life is anything like Australian, this is certainly something that people would realistically say - it's anti-liberal, anti-elitist, everything people love. However, the wisdom of putting it on stage is something else altogether, especially if it's likely to be read uncritically - or even with active support - by an audience. There are worse examples than this in the play, and in fact, I am forced to presume that within the dramatic reality, Black people are there precisely and only to be mocked. Which is not that great, actually, when you see that it's 2018. It's lazy, shit writing - it's easy to choose another target - and there are many, as the rest of the writing demonstrates.

These moments are the exception and not the rule. Nevertheless, when they came up midway through the first act (and were returned to when an easy laugh is needed) I began to wonder who the play's target was. Is it looking at the way Estonian national identity is celebrated? Is it, itself, a celebration of the culture that it's criticising? As the second act wore on, and the play started to bare what teeth it had, a feeling of disappointment set in. What had begun as a promising an painful reminder of the more forgotten areas of Estonia had, in the moment of synthesis, lost its teeth. Of course, the characters we love mount their War of Independence play, they even get the mayor involved. But it's a play that's lacking the courage to follow through on its arguments, and to properly extend them to their conclusion.

The play is the worser for it. That didn't stop it getting a standing ovation from the DRAAMA audience, many of whom, not surprisingly, are white Estonians.

But not all. Not all. And even if they were, maybe if we didn't take such easy territory, our plays would have just a little more political firepower than softly rattling the cages of those elites, eh?

To Touch The Moon
This play differs from others in the program, in that it's an attempt to blend choreography and drama. In this sense, it's pretty successful - dramatic moments climax in bursts of movement, as the plot follows a young girl's (Jaune Kimmel) attempts to escape Estonian Folk dancing for the more 'real' teaching of a mysterious stranger (Madis Mäeorg).

In other ways, the play is less successful. The plot feels like a made-for-TV drama, full of teenage angst, over-dramatised representations of cocaine use (if you stuff a whole bag of cocaine in your face, you will end up in hospital, not simply shivering on the ground)  and some reductive links between dance and political freedom. While the writing could be better, it's a play that's obviously in service to its complex technical components and choreography, and many spectators will be satisfied on that score alone.

Basically, it's the 2006 film Step Up for Estonian theatre. Some people definitely want that.

The Swallows of Fatherland


To Touch the Moon

Posted by Richard Pettifer at 3:00 PM