It's that point of the festival, where meetings, meals, parties, art, and discussions have accumulated to the point of a blissful overload. The barrage of interesting encounters snowballs over the course of Faki - from smelling flowers in the botanical garden to meeting a human resources manager who hates her life in the courtyard of Medika - collecting into a feeling that's at once overwhelming and blissful. It's like you reach the stratosphere of conception and then slingshot straight out into outer space (with accompanying feelings of freedom).

Day 5 is the last real day of the festival, with only a special 'Critic's Forum' to come today on Day 6. In this event, we will try to put the theme of Physical Theatre into a critical context, bringing together some threads that are lying around into a tightly-woven towel of critical conception. But as I try to get my head around the pronunciation of Croatian surnames and cases (in the program I am amusingly referred to as Richarda Pettifera, which apparently creates all kinds of headaches for the Google algorithm), I am thinking again about the role of criticism in such situations.

Criticism feels like a lost cause at the moment. Cultural norms have shifted in favour of the artist or author - the bearer of first-person voice - and away from the critic, traditionally a guardian of the 4th Estate. Defending this territory is actually more an act of perpetual revival, akin to bailing water after the floodgates have broken. Even understanding a little bit the problems of maintaining a sense of common public discourse (its whiteness, its patriarchy, its capacity for body-shaming, its erasure of certain histories, the list goes on) I openly and somewhat nostalgically advocate for critical discussion on (flawed) neutral platforms, without the personal and with a shared attempt to create empathy, cross boundaries, promote social advancement and so on. No platform is neutral, but some are more neutral than others.

The biggest attack on criticism comes from those who propose to support it. The protection of 'Free Speech' rarely refers to a public domain, and much more to instances where what is discussed is not convenient to their (visible or invisible) cause. That is never the point of criticism. If I write on work, I always do it with an explicit agenda of furthering public discourse and discussion, of introducing new ideas, conflicts, and challenges. It is much easier that we do not attempt to conceive artwork, because this may, heaven forbid, result in some shifts in cultural perceptions. The attack on critical thinking is motivated by a desire for are nothing to change.

My work today is to address the organised chaos of last night's Lift and Carry from NeverEndingCompany. The promised interview with Puzzle Pie(s)ces will have to wait for the train ride home tomorrow morning - among the accumulation, I have simply run out of time here.

Apocalypse is a dangerous idea. It's not that its false - the end of the world is undoubtedly a very real possibility in various ways. It's just that the concept holds massive fears for many, concerned with preserving the illusion of immortality in one way or another. This makes it open to manipulation and abuse by powerful interests and ideologies. Beginning with its conception in Christianity, apocalypse is evoked to ignore the more immediate and material suffering of others. Lately, this manifests as a difficult point of climate science - how to communicate the real and present dangers without sparking a slide into ecofascism or dystopian realities of white supremacy.


The end of the world is, of course, a reality. All things come to an end, like a good novel, or a festival. The way we conceive it is powerful, and various symbols have been created to attempt to illustrate and communicate  it - the subject of much religious art, for example. Lately, the media has picked it up as a recurring motif for human self-hate, that our capacity to destroy ourselves and our subsequent feelings of guilt make the best possible clickbait, a kind of obsessive existential doubt about human activity in general.

Lift and Carry's apocalypse event results in a short sweep and vacuum of the stage to the tune of one of Mahler's Chorus Mysticus. That's a comforting conception by any measure. There's a certain accountability to it - if you make mess, clean it up. And if you find that mundane, then please put on some music you like - something emotive. And at the end you can fire a glitter bomb as a special reward for your work.

What precedes this deliberately anti-climactic plot device is essentially 3 separate performances, staggered in their timing over the course of four hours, and with each adding 5 minutes to a single performance (so 5' at 18.00, 10' at 19.00, 15' at 20.00 and so on). New renditions or 'openings' repeat the previous material, adding new perspectives to the pre-existing performance. The 'final' piece is displayed in its full 20 minutes in the final rendition. 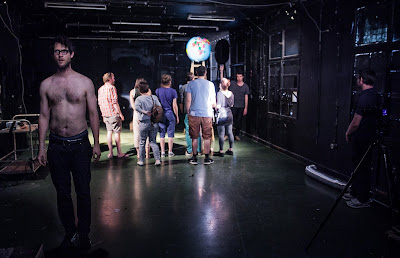 I say 'final' because, really, the piece functions as a complete whole over the course of 4 hours, and audience arriving for only the last opening will have a totally different experience to one who was there from the beginning (I believe the same was true in a previous, slightly different version developed in Stuttgart's Akadamie Schloss Solitude). This is, in a sense, a privileging of viewing positions, and creates some nice divisions between neighbours - some of whom may be seeing a moment for the first time, some for the fourth. It also broadens out the festival theme of 'physical theatre' into something like 'metaphysical theatre', relating to the arrangement or assemblage of objects in time and space.


That's an apt description for the stage events too, which play out as a kind of tinkering with technology and objects to test their respective realities. The opening (first opening) sees a metronome set to tick together with a projection of a metronome ticking slightly slower (apparently a glitch in the technology). One of the performers (Till Wyler von Ballmoos) climbs a ladder as another (Cássio Diniz Santiago) reads a somewhat confounding text, "the descent beckons as the ascent beckoned". Upon reaching the top of the ladder, Wyler von Ballmoos states "eh, Cássio, can you give me the world?", which is thrown to him in an inflated form by Diniz Santiago. As Wyler von Balmoos climbs down, a third performer (Nikolaus Witty) blows into a horrible home-made instrument made from two pipes (apparently discovered on the floor of Medika). Addressing the audience, Diniz Santiago mouths to a prerecorded audio that they should come onto the stage. He introduces the various stage objects to us on this guided tour, as Wyler von Ballmoos strips naked at the front of the stage. Finally, Wyler von Ballmoos is left howling naked at the centre of the stage amidst smoke and a remix of Strauss' Also Sprach Zarathustra, with Diniz Santiago speaking in inaudible Portuguese. And that's just the end of the first opening.

Things follow from there. But what's interesting is not what new information they reveal, exactly, but how the change the pre-existing information, and especially this first opening. A section of disappearing text is accompanied by a story about the absent collaborator Vanessa, apparently a weightlifter who had carried them around to different corners of the room and shifted objects around as she explained about women taking over the world. Wyler von Ballmoos adorns a ritual mask as Diniz Santiago reads some text relating to The Four Worlds of Kabbalah. Then the metronome makes its inevitable return, only to be met with the anti-spectacle of sweeping and mopping the stage to a Mahler symphony. The 'grand finale' is an anti-spectacular glitter-bomb, presumably a friendly gesture towards those from Medika who may not quite grasp the barrage of references.

The manifestations point to a significant body of research. The title refers to a fetish, also called 'lift and carry', which is mainly an arousal coming from being lifted and carried, and frequently connected to Macrophilia (commonly relating to giant women) or Muscle worship (similar but for muscular people). Further points of examination include death (which I read as apocalypse, rightly or wrongly), different towers and ladders (such as Pieter Bruegel the Elder's The Tower of Babel and Tatlin's Tower) and the fetish that offers the show its title. Wyler von Ballmoos and Diniz Santiago speculate extensively on metaphysical matters such as the birth and death of creation. Despite the apparent breadth of research, it's a specific investigation, undertaken to reexamine questions of existence through the tools of the theatre.

As a picture evolves and folds back on itself through the opening, the results are satisfying, even if its vision of humanity feels pretty Europe-heavy in its research scope (with notable exceptions). The set has the feel of a project space or rehearsal room, which gives the performance a openness and spontaneity, and the casual approach of the performers creates a space of potentiality with various possible outcomes (the stage intrusion of one of Medika's many cats, for example, could just as easily have been planned). It's certainly a performance that can be read multiple different ways - my own reading of apocalypse, for example, was not shared by other audience members, despite a powerful presence of foreboding.  Nevertheless, this contained the piece's most powerful resonance for me, in that it represented one of the only times I have encountered the end of the world in a way that made me feel comfortable and not reaching for the nearest capitalist product with which to douse my anxiety.

Apparently I have seen  Diniz Santiago's work before, in the form of the fantastic Finnegan's Ueinzz, at Baltic Circle Festival in Helsinki in 2009 (wasn't writing back then). This doesn't reach the incredible humanism of that project, but it's also not meant to - offering instead a contemplation of time, death, and being in arrangement of objects, text, and gesture on stage. It's yet another new approach to physical theatre present at the festival, and quite a way to round off an exceptionally well-rounded festival.

Posted by Richard Pettifer at 7:45 AM