In 2013 I wrote of Nassim Soleimanpour’s White Rabbit, Red Rabbit:

“Who does it serve? Initially, I thought, surely it is the country (Iran) itself. As the night wore on, I whittled this down to 'the individual', optimistically hoping for a Beckettian, Orwellian or Ionescoian argument. Finally, I was left with, sadly, only the writer himself.”

Almost a sequel to the globally successful White Rabbit, Red Rabbit, Nassim does a lot to elucidate that initial project. The audience arrives on the premise not unlike its predecessor: that they will see another play in which the script is read by an actor (an obliging Thomas Spencer for the premiere) who did not yet read it. However, a twist is thrown in while the house lights are still up: this time, the actor would be reading from a projected screen. Nope, wrong again. This time, we would be blessed with the presence of the playwright himself, as Soleimanpour is fetched by the actor and brought to the stage to wild applause. 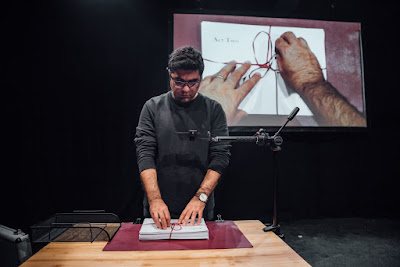 At which point, this really becomes the Nassim show. For a playwright (who sometimes have a year-long response time), Soleimanpour has a great sense of wit and timing when interacting in his second language, and the play proceeds through some entertaining modes of Farsi class, learning about each other’s lives, and storytelling – always returning to a faintly nihilist ‘what do we do next?’ moment hovering in the air. Through this, we are offered seemingly private information about the playwright, discovered through interactions with him via the premise of learning: we get to view his passport, we get to send a message to his wife, and we even get to speak with his mother in Iran.

The play has some great moments, such as the audience’s initial discovery that the video projection is a live one, which happens through the learning of a new English word (for the premiere ‘solitude’). Soleimanpour’s concern with fairy tales plays well as a link between himself and an audience, as does his distance from family. The mode of gaming – not ‘play’ in Schiller’s sense, but more in a decision-making or game theory sense – is effective in creating a friendly and light environment in the theatre, in which people feel free to make contributions and occasionally to break the rules. There are times in Nassim when it’s almost like interacting with an AI: a sort of call and response, or a reward/punishment device.

Soleimanpour also remains standing in naïve wonder before language and its power, and this levity/gravity has some interesting results, many of them oscillating freely between tear-jerking manipulation and a sort of casual freedom.

But I found myself again left empty by Nassim. Not only does it repeat White Rabbit’s mythologizing of Iran (here there is an unexplained throwaway line “These things happen, right? Especially in a country like Iran.” Which, among the western media’s hyperventilative characterisations of the country, could mean anything) but there’s a new layer of fabrication of risk that is even more disappointing. Given that the playwright consistently emphasises how high the stakes are, the fact that it was a constant question for me of ‘what are the stakes here?’ is a point of interest.

Connected with this, whilst the journey pretends to be one of pedagogy and exchange with the audience, it is important to ask, apart from the omniscient position of the playwright, what is really learned. This is, for me, an important point, not only because it divides a play like Nassim from pedagogically-focused experiments such as Brecht's Lehrstücke. As with White Rabbit, this lies exactly at the intersection of the playwright's background and his Western audience. And it makes me wonder: is this what really provides the satisfaction in both White Rabbit and Nassim? That, in principle, reaffirmation of that core western value: individualism, today transformed into self-promotion, transferred through the vessel of the writer? Is humanism today really reducible to such simple universals as missing one’s mother, or having a house with a balcony? If, threatened again by contact with this other world of Iran, we leave the theatre only with our preconceived ideas restored, then what was really learned? Was this really about learning about ‘the other’, or simply an affirmation, disguised as learning?

Such a question reveals the staging of seemingly high-stakes theatre into low-stakes tricks. Truly high-stakes would be a much more self-critical, self-aware play, where the author offers something of himself to be negotiated. Where he fundamentally says something he does not want to say.

I saw that in 2014's Blind Hamlet, but it is not present here. That may not matter to Soleimanpour, who seems concerned here with consolidating his oeuvre – nor to his audience, who will appreciate a re-affirmation of family, home, and the common humanity we all no doubt share.

English Theater Berlin
Until January 17th
For a list of performers each night, see the English Theatre Berlin website: https://www.etberlin.de/production/nassim/

Posted by Richard Pettifer at 4:14 AM