I was a brief, unofficial guest of the London International Festival of Theatre, which runs 3-19 June at various locations.

It was a shock to find that this show, brought to the festival by chelﬁtsch, Japan, had left me with nothing, perhaps even less than nothing. 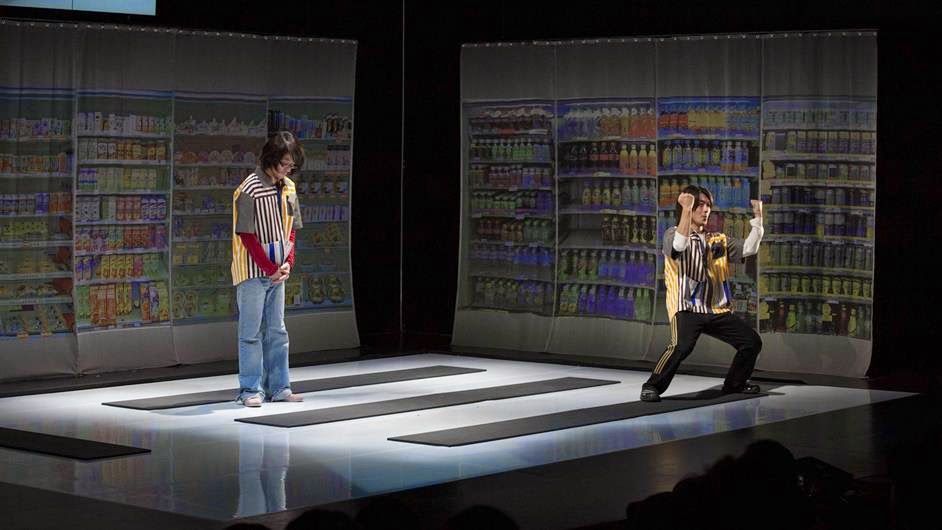 After all, the elements are there. Super Premium Soft Double Vanilla Rich is a stylised, absurd piece of - I'm going to call it 'movement theatre' - that takes a convenience store as its central metaphor for human existence. The absurdity of convenience stores, and employment of them to illuminate the human being's capacity to willingly succumb to dehumanisation, has been pointed out in material as diverse as Kevin Smith's Clerks and Andres Gursky's 99 Cent. The material elements of this dehumanisation are obvious and plenty - neon lights, brightly coloured packaging setting up a power relationship with the spectator, the various control mechanisms in place which seem to coercively determine habit without ever rendering itself visible - the entire functioning of language in this space - like a form of new-age propaganda.

The show did what it wanted to do - opening a discourse about humanism through the absurd disconnect between body and speech. We are taken into a kind of purgatory, where two workers, (Shingo Ota and Mariko Kawasaki), are introduced to the third, (Azusa Kamimura), an actress, after the firing of their South Korean colleague. The dialogue is persistently coloured by an absurd choreography, so whenever a character talks, they make these bizarre movements, seemingly entirely seperate to their banal, formal speech, but occasionally connecting with it. The actors speak in long monologues, crawling around the set - two painted scrim curtains of supermarket shelves in an 'L' shape - in a weird, flowing, aimless state, backed by a horrible elevator music version of the Bach, like some kind of culture-clash nightmare.


Together with the smooth, flowing nature of their movement, repetitive, yet uncertain, (the style of the choreography, I should point out, was for me a major strength of the show - it seemed to give voice to the disconnection and create almost its own choreographic poem), the points of interest were fairly clear. It's just that there were several of these points, floating in their air waiting to be plucked, like so many items waiting on a shelf. Was it about control of human behaviour? The removal of personal relations? The convenience store as a site of spirituality? I had a problem with this for some reason - actually it felt unfair, like an unfulfilled dramatic argument.

This is nicely reinforced by the ending, which is essentially a joke about a guy that cannot shit in the convenience store he doesn't believe in. Whilst it's tempting to dig around hopefully to try to find a dramatic climax here, it seems to me that in fact there wasn't one - that, if it was doing anything apart from a poo joke, this moment was simply reinforcing several things that had already been said about denial of the body, or the ability of convenience stores to provide infrastructure. There was nothing new here. And then suddenly, it was over.

Let's be clear - the reason I found this so disappointing was purely for the reason that the show had so much potential. I wanted a clear target. Instead, the show seemed to hum and vibrate, never quite detonating.

I needed it to detonate. Because what it's talking about felt important, or at least kind of important. But the decision to back away from this and reach for the shit bucket is like the act of putting one's hand under a customer's to prevent them from dropping change - it's at best a slight touch, an awkward ellipsis that is too easy to miss. It may be a great portrait of today, particularly perhaps Japan, but the uneasy feeling created does little more than illustrate and reflect these contacts - it does nothing to activate them. As a result it sits for me, regrettably, in a place of so much other performance, insightful but flaccid, offering the spectator little more than an image which relieves you of your eyeballs for a time, and  ultimately disappearing like some dream you can't quite remember.

There is an entire conversation here about the value of critique and whether or not it is dissipated when you employ it in ways which betray it's intent. For my mind, I draw a line here - if you don't follow through, if you build a dramatic argument that does not deliver, you run the risk of diluting that critique and therefore undermining its power. Postmodernism's participation in the dilution of these critiques is one way in which it creates this cynical, distanced spectator, opening anxieties precisely in order to allay them. It's dangerous. And ironically, in many ways it's what the play is talking about. But if you weren't willing to stick your neck out, you shouldn't have gone to that war.

Which is, effectively, what is happening here. And again, it's a shame. It was all up for grabs, right through the show. But opening the right can of worms is simply not enough. Let's be more uncompromising than that - let's try, and fail - not this terrible, terrible middle-ground.
Posted by Richard Pettifer at 7:20 AM