Hyperion: Letters from a Terrorist

Postscript: an interesting interview with Castellucci over at Exberliner. Interviewer - Summer Banks.

A friend once told me she'd rather die than be late to the theatre. There's certainly something horrifying in arriving after the lights have gone down - it encapsulates everything about theatre as a social event, and your personal violation of it. Suddenly you are accidentally in a nightmarish minority.

So it was that I was pedaling frantically, not for the first time, towards Charlottenberg and the Schaubühne, watching the time hurtle towards 8pm and desperately cursing my poor Berlin geography as I took my 3rd wrong turn. 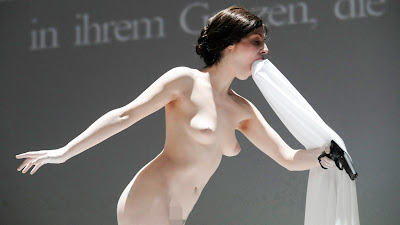 If there's a show not to be late to, it's probably Romeo Castellucci's Hyperion: Letters from a Terrorist. In the first 5 minutes, I'm reliably told, a man enters a well-furnished, mod cons apartment  - decorated with more than the usual straight lines, plasma screens and hospital aesthetics - does nothing for a moment, and leaves again, never to be explained. A police unit, fully adorned in swat gear, bursts into the apartment and proceeds to search it. What they are looking for is question which also remains unanswered, only becoming more urgently so as more and more police file into the apartment and begin to trash it entirely. When the place is a complete mess - a chaotic parody of its former discipline - they turn to the audience. And now it's our turn. Every single member of the audience is forcibly evacuated.

"What a perfect way to illustrate the sliding scale of the ethics of interogation" I would have thought. Had I been there.

But at this point, miserably, enter your reviewer, huffing and puffing, entschuldigunging his way through the ushers to find the audience spilling out of the theatre, a buzz of discontent and excitement in the air. For an extraordinary 20 minutes of pause, we sit outside and exchange comments, perhaps unfortunately, on what just happened - whether it was an offensive gesture from a genius past his best or another triumphant coup d'état (or in my case, whether or not I have actually violated etiquette, given the circumstances). And then, finally, we file back in to the darkness and a fresh, clean, sparkling white set.

What follows is a poetic meditation on the subject of terrorism. Castellucci has freely adapted the source novel into four monologues, delivered by four different actors, and it is these monologues which contain the textual 'meat' of the play. But the cynical, arms-folded audience and I were not there to see the text, really, were we? This is a master of contemporary theatre, and it's his handling of the material, those auxilery elements which develop a perspective, which will generate the most interest. In this case, apart from the opening, we are gifted an empty stage with changing words projected up onto the three walls ('chair', 'table', 'white' for example) hinting at both the contents of the stage and their signifying words. At this early point, I expected these structuralist connections between signifier and signified to be destabilised - a promised never really delivered on by the drama which unfolds (if there is any - Castellucci, famously minimal at times, delivers perhaps his most scarce theatre yet). Likewise, courtesy of another transition we are delivered a curious breakdown of the elements composing the human body (apparently, if I remember corectly, 0.000000017% tin) via a scrim and a projector. For me this dissection was remeniscent of Sasha Waltz's Körper, in a particular moment, one of the dancers, directly addressing the audience, assigns value to each of their body parts. One could be forgiven for thinking Castelluci, an Italian director playing an away game on the German stage, was attempting to address some of the more meticulous cliches of German contemporary theatre.

Or indeed the German society itself. One of the few points of interest I found in the text:


This sequence, delivered with acidity by the actor and addressing both the German patriarchy (perhaps no more prominent than any other European country, but still omnipresent) and tendancy to favour exactitudes, delivers a curiously castrating diatribe. In contrast with the rest of the play, here is a direct affront to Germans culture, and it seems to operate at once against the entire German philosohpical and industrial tradition since the 1800's.

Otherwise, we are delivered a reasonably standard Castellucci abstraction. For me it was largely empty of meaning. No doubt this was partly intentional - the poetic, at its best, only creates space, and requires its spectator to complete it. This can be an affirmative action, insisting that words cannot exist without the spectator to create their meaning, and thus re-inscribing the significance of the human being. However here it operates at a curious cross-purpose, namely, the untold horrors of Terrorism, too horrifying to be fully described and therefore accessible only through the poetic. For me, the gap between imagination and intention was too great to leap. I found myself pleading "just tell me the answer!!", and not enjoying the sensation of poetic suspense.

All of this is unraveled in a curiously labourious ending where our old friends the Swat Team pour buckets of black water on the stage and perform a banal mopping, becoming absurd janitors or perhaps stage managers, leaving only the black imprint of a gun against the bare white of the stage (achieved through some design wizardry). It's a curiously kitsch ending for Castellucci, as if attempting one final provokation, but its effect for me was to leave little scope to interpret the play outside of its defined parameters. It seems the kind of resolution reserved for plays which are too afraid that the can of worms previously opened might be misappropriated - perhaps a genuine fear given the specter of Nazism.

That seems unlikely here. Whatever untold terrors the play is hinting at, they remain much too abstract and distant to be accessed in any revolutionary way. It's as if the sledgehammers Castellucci employs to smash through the poetry have entirely dissipated whatever significance the text might have held. I left the theatre curiously empty, and perhaps with no additional tools for making sense of a world increasingly defined by the word 'Terror' and its various ideological guises.

Schaubühne Theater
Posted by Richard Pettifer at 6:38 AM