Kiosk Day 2: Pranks, Objects, and the Failure of AI

Staring down at my almost-incomprehensible notes, muddied by the rain that inconveniently intervened the day before, you can see the chaos of festival-time. The blurs of the smudged grey lead blend with watermarks to create a beautiful diorama of activity.

This is an accurate representation of Day 2, which presented a chaotic array of colours and shapes, occasionally punctuated by discernable segments of text. The following is only a representation of a few of them - even of those I saw, it would be too many to write about.

"Sometimes I think culture is just moving things around".

This comment is attributed to a worker from STANICA Cultural Centre - a festival hub for Kiosk - while moving a table around as he set up for a performance one day. It seems an apt metaphor in some ways. The object, the structure, play a central role in defining the theatricality of a situation, including its sources of power.

STANICA is also the location of Living Room, a work of object theatre from artist Lukáš Karásek that, as the title suggests, is primarily occupied with animating furniture. Indeed, there is a lot of 'tinkering' involved in this work, that follows the journey of a closet and set of drawers through time, space, and the limitless universe of animation in performance. Our cupboard-hero, sitting on the head of the solo performer and with handles forming a comically-blank expression, encounters various frustrations and travails as they attempt to undertake various tasks inside the logic of the staged world - a sort of magical, playful, literally living, room.

Technically, it is fantastic to witness, and Lukáš Karásek's relentless control is among the best I've seen for this type of theatre. There is always something magical in witnessing this type of art - as Karásek creates and dispels various illusions, the audience can fill itself with a childlike wonder. Beginning in the closet, Karásek spends a good deal of stage time simply trying to escape, finally pushing himself against the set of drawers, which then becomes a type of anthropomorphic face. This transformation from the invisible closet to humanoid draws begins the playful journey, comic for a type of reverse-frustrationism, where objects become animated precisely through their frustration with the behaviour of other objects. The different stages of the journey (dramaturgy: Viktor Černický) are marked by the pulling of a light-switch, which the performer sometimes amusingly cannot reach, depending on the constellation in which he finds himself in at the time. 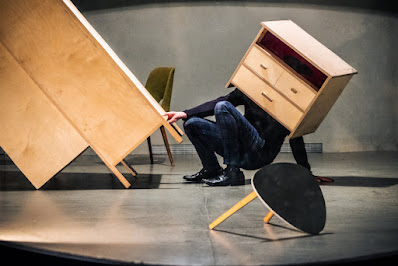 The journey culminates in a fascinating epilogue, in which marbles are accidentally scattered on the stage in an act of infinite chaos. The final phase elevates Living Room out of a simple play, and into a discussion about human imagination and its limits. It's a traditional theme, but lovingly told, and a useful reminder of the stage conventions that feed so much of human self-conception through the stage.

If I generally don't like artworks that address AI, it's because it works with an annoying version of 'the unknown'. I've seen otherwise normal artists, when faced with the theme of AI, suddenly become drunk on power and weaponise it as a limitless source of ideological force. Yet AI has limits, sometimes extreme ones - something that Big Tech often refuses to acknowledge, and which are not popular to discuss. Such is the human investment on technological solutions today, that warnings, critiques, and even obvious points are simply refused, in favour of a view of AI that is "inspirational" "boundless", and therefore "hopeful" in a bleak context. We need the technology to work - to imagine otherwise is fast becoming unthinkable.

Read more »
Posted by Richard Pettifer at 5:32 AM No comments: